In a speech at the University of Southern California, former CIA director David Petraeus spoke for the first time since his resignation after it was exposed that he was having an affair with his biographer Paula Broadwell. Here’s what you need to know.

“I join you keenly aware that I am regarded in a different light now than I was a year ago,” Petraeus said at the event. “I am also keenly aware that the reason for my recent journey was my own doing. So please allow me to begin my remarks this evening by reiterating how deeply I regret — and apologize for — the circumstances that led to my resignation from the CIA and caused such pain for my family, friends and supporters.”

2. He Resigned as Head of the CIA After News of the Affair Broke


Petraeus resigned from his position as CIA chief general last November when an FBI investigation proved that he was having an extramarital affair with his biographer Paula Broadwell. 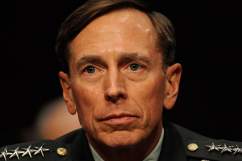 “Yesterday afternoon, I went to the White House and asked the President to be allowed, for personal reasons, to resign from my position as D/CIA,” Petraeus wrote in his resignation letter. “After being married for over 37 years, I showed extremely poor judgment by engaging in an extramarital affair. Such behavior is unacceptable, both as a husband and as the leader of an organization such as ours. This afternoon, the President graciously accepted my resignation.”

3. It Was the First Time He Publicly Spoke Since the Scandal
Tuesday night at the University of Southern California event was the first time the former general spoke since the scandal went public. Petraeus has been in seclusion since he resigned and his lawyer Robert B. Barnett said that he was spending much of his time with his family.

4. It’s Been a Challenge to Transition From Military Life


Petraeus said in his speech that it has been difficult transitioning into the civilian world.

“There’s often a view that because an individual was a great soldier, he or she will naturally do well in civilian world,” he said. “In reality, the transition from military service to civilian pursuits is often quite challenging.”

5. He Will Most Likely be Successful in Rehabilitating His Image
Unlike other public figures who have been caught in extramarital affairs, such as former President Bill Clinton and former U.S. Sen. John Edwards, Petraeus took responsibility for his actions instead of trying to lie his way out.

“America is a very forgiving nation,” said Michael Levine who, among dozens of other celebrity clients, represented Michael Jackson during his first child molestation investigation. “If he follows the path of humility, personal responsibility and contrition, I submit to you that he will be very successful in his ability to rehabilitate his image.”