North Korean state media released a photo of leader Kim Jong Un leafing through documents with “Plan for the strategic forces to target mainland U.S.” written on the wall behind him.

North Korea announced on Friday that it has entered a “state of war” with South Korea and that it would deal with every inter-Korean issue in a wartime manner, reports Aljazeera.

“The long-standing situation of the Korean peninsula being neither at peace nor at war is finally over,” said a statement from the official Korean Central News Agency (KCNA).

North Korea and South Korea have technically remained at war since their three-year conflict ended in 1953 with an armistice and not a peace treaty. The North Korean army declared the armistice invalid on March 11.

Tensions with North Korea have been growing stronger for months with the country remaining defiant and even belligerent in the face of international efforts to halt its nuclear program. In another statement from the KCNA on Thursday, North Korea targeted the United States, an ally of South Korea, calling its nuclear testing a “legitimate measure for defending the sovereignty of the country and the nation and protecting peace from the U.S.”

“It is illogical for the U.S. to assert that it can carry out nuclear tests, launch missiles and pose nuclear threats while the north can not launch satellites for peaceful purposes nor conduct a nuclear test for self-defence,” the statement said.

KCNA also reported that North Korean leader Kim Jong Un had approved a plan to prepare standby rockets to hit U.S. targets, including military bases in the Pacific and in South Korea.

“If they make a reckless provocation with huge strategic forces, (we) should mercilessly strike the U.S. mainland, their stronghold, their military bases in the operational theaters in the Pacific, including Hawaii and Guam, and those in South Korea,” KCNA reported.

Observers say that North Korea is still years away from having the technology to deliver nuclear warhead on a missile, but nevertheless, the U.S. will be keeping a close eye on what they think the North Korean threat is. 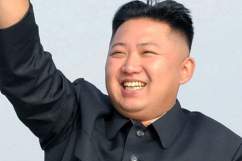 Read More
North Korea, South Korea, United Nations, War
North Korea announced that that is has entered a "state of war" with South Korea and that it would deal with every inter-Korean issue in a wartime manner.