The surprising find that occurred on the afternoon on Friday, April 26, in lower Manhattan is not a landing gear belonging to a 9/11 plane but a piece of a jet wing, reports NY1. 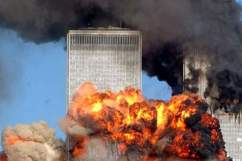 According to the NYPD, the 5-foot-long part was hauled from alley between 51 Park Place and 50 Murray Street and is a “part of a trailing edge flap support structure.” The wing is that of a Boeing 767; both planes that hit the Twin Towers on 9/11 were 767s.

The hydraulics on the wing led to it being mislabeled as landing gear. The area is still being treated as a crime scene as there is a concern about the possibility of human remains being found there.

At the World Trade Center site, today was supposed to mark the application of the final spire to the top of the so-called Freedom Tower, which will open for business in 2014, but that’s been postponed until further notice due to weather conditions.