The AP’s Twitter was just hacked, and an alarming tweet went out that sent the online world into a momentary frenzy:

The Dow Jones instantly dropped 100 points, as you can see in this chart from Google Finance:

Sam Hananel of AP quickly confirmed that it was a hack: The White House confirmed the president is fine:

TMZ is reporting that the group behind this Twitter hack is the same behind the leak of financial data of Michelle Obama, Joe Biden, Beyonce and other high-profile officials and celebrities. TMZ reports the same group, earlier today, “issued an ultimatum to the U.S. Government — either declare war on North Korea or they will detonate bombs at the White House …”

But the Syrian Electronic Army is claiming responsibility for today’s hack:

The Washington Post reports the Syrian Electronic Army “have hijacked a series of Twitter feeds over the last few weeks.” 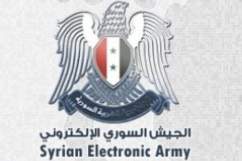