Despite believing that the surviving suspect of the Boston Marathon bombing may have been heavily armed, officials are now saying Dzhokhar Tsarnaev had no firearm during the “shootout” that took place before his capture in a boat Watertown, reports the Washington Post.

The boat in which the suspect was hiding was riddled with bullets from law enforcement weapons, and in televised coverage rapid gunfire was clearly heard. Previous reports indicated a weapon was recovered in the boat.

An unnamed official official cites the “fog of war” in explaining the intense use of force against an unarmed suspect. One official said, “Hours earlier, he and his brother had killed a police officer, shot another officer and thrown explosives out of their cars as the police were chasing them. They couldn’t assume that he did not have a gun and more explosives.”

The elder brother, Tamerlan, was killed during the confrontation with police last Friday and was run over by a car driven by the escaping Dzhokhar.

Dzhokhar Tsarnaev is in recovery at a Boston hospital after suffering wounds during the confrontations with the police. While previous reports indicated he suffered a self-inflicted wound, that too is now in doubt.

The suspect was able to speak with the authorities about his involvement in the Boston bombings and was officially charged on Monday. 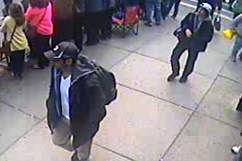 Loading more stories
wpDiscuz
0
0
Would love your thoughts, please comment.x
()
x
| Reply
So what was all that shooting for?