Gunman Holds Firemen Hostage in Georgia Standoff: 5 Fast Facts You Need to KnowA gunman holds firefighters hostage in Suwannee, Georgia. Most recent updates and information here: http://www.heavy.com/news/2013/04/firemen-hostage-gwinnett-county-georgia-standoff/ Five Fast Facts You Need to Know is a blazing fast, lighting-response time news series that gives viewers the five most salient pieces of information they need to know about a story. We pride ourselves on getting you the biggest stories of the moment, but also the more weirder side of the news. See heavy.com for more info.2013-04-10T21:31:26.000Z

UPDATE: 12:30 p.m Thursday, April 11: The deceased gunman has been named by authorities as Lauren Holman Brown, 55.

The gunman who held four firefighters hostage in a home in Suwanee, Georgia, was shot and killed when police stormed the house after a tense four-hour standoff reports the local NBC affiliate. The situation started when Gwinnett County firefighters were lured to the house Wednesday afternoon by a man who faked a heart attack.

According to the Gwinnett Daily Reporter, the home is located at 2440 Walnut Grove Way in Suwanee, Georgia,

Here’s what we know about the situation:

1. The Gunman Was Shot Dead After Police Stormed the Home

The gunman who took five Gwinnett County firefighters hostage is now dead after police stormed the house to end the four-hour standoff. When police felt the firefighters were in “immediate danger,” they used a flash-bang grenade to distract the suspect. The suspect died in a subsequent exchange of fire. All firemen made it out with only minor injuries. One police officer suffered a bullet wound to the hand but is otherwise okay.

“This is the result of his actions,” Gwinnett County police spokesman Edwin Ritter said. “We didn’t want it this way but he was calling the shots, and this was the end result.”

2. Firefighters Were Lured to the Home on a Ruse
Here’s how it went down. Five firefighters, all trained as paramedics, responded on a medical call at 3:41 p.m. local time, in one engine and one ambulance. Sources say the man at the home faked a heart attack to lure them to the house, according to WSBTV.

Just from @kerrywsb: Sources say man faked a heart attack to get medics to the house. #Gwinnett

3. The Gunman Took Them Hostage
When the firefighters got there, the gunman, apparently the same man who called 911, barricaded himself in the house with his hostages.

4. One of the Firefighters Was Set Free
The gunman took five Gwinnett County firefighters hostage, then allowed one of the five to leave to “move the fire truck,” according to a fire official speaking live to the local NBC affiliate. Four firefighters remained trapped in the home.

The firefighters are from Local Engine 10.

Gwinnett County Fire Station No. 10, where the firefighters of Local Engine 10 are stationed. It’s 3 miles from the scene of the standoff. (Photo via Gwinnett County Government)

5. There Was a Massive Police Response

A SWAT team was on the scene as part of a massive emergency response as they negotiated with the gunman. There were 50-plus police, fire and rescue personnel on-scene.

6. The Gunman Wanted His Cable Back
Gwinnett Police Cpl. Ed Ritter said that the suspect had recently lost his utilities and cable due to financial difficulties and demanded they get restored.

“He wanted all those things turned back on,” Ritter said. “That’s why he was holding them hostage.”

7. The Gunman Was Not ID’d Until Thursday

9. The Home is Near Two Schools


The house is located very close to the local high school and elementary school, which are both closed for spring break. 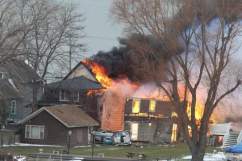