An eastbound train from New Haven to Manhattan derailed, striking a westbound train on a neighboring track. Some cars from that train also derailed as a result. Photos of the incident show a smashed train car off its track and brushing up against another train.

2. It Happened Near Fairfield, Connecticut

The collision happened at about 6:10 p.m. on Friday just east of the train station in Fairfield, Connecticut.

It is unclear how many people were aboard the rush hour train, but NBC News reports that 60 people were injured in the incident, and at least five of them were in serious condition. No deaths have been reported.

4. The Cause is Unknown

“At this stage, we don’t know if this is a mechanical failure, an accident or something deliberate,” Fairfield police spokesman Lt. James Perez told the Connecticut Post.

5. Service Between New York and Boston Has Been Suspended

Amtrak said that service on the Northeast Corridor between New York and Boston has been suspended as emergency crewmen work around the clock to clean up the wreckage.

“At the request of local authorities, and due to ongoing police activity, Amtrak Acela Express and Northeast Regional service remains suspended indefinitely in the Boston area. Northeast Corridor trains are terminating at New York Penn Station,” Amtrak said in a statement on its website.

“It looks like it’s going to be some time before the tracks are open again,” Gaudett said. “I don’t believe the trains are going to be running (Saturday) morning. 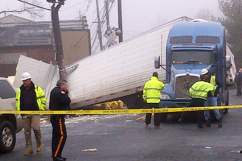 Loading more stories
wpDiscuz
0
0
Would love your thoughts, please comment.x
()
x
| Reply
There are no reported fatalities, but at least 20 people were hurt.