After much speculation, it can be confirmed that Yahoo! will acquire Tumblr in a $1.1 billion cash deal. The story broke via the Wall Street Journal’s Twitter:

Breaking: The Yahoo board has approved a deal to pay $1.1 billion in cash for the blogging site Tumblr. wsj.com 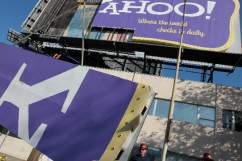 Yahoo to buy Tumblr for 1.1 billion dollars!!That’s one expensive collection of Glee and Doctor Who GIFs.

Yahoo trying to buy Tumblr is like when you’re a teen girl and your mom tries to borrow your clothes.

Now that Yahoo is buying Tumblr, no one will be allowed to use Tumblr from home.

Loading more stories
wpDiscuz
0
0
Would love your thoughts, please comment.x
()
x
| Reply
After much speculation, it can be confirmed that Yahoo! will acquire Tumblr for $1.1 billion.