As celebrities gathered for the premier of The Hangover Part 3 on Monday night, thousands of people across Oklahoma lost their homes and at least 24 lost their lives after a massive tornado instantly devoured everything in its path. The Oklahoma state medical examiner’s office confirmed that nine of those killed were children.

Moore, Oklahoma after a massive tornado plowed through it and destroyed everything in its path.

As a dark cloud hovered over the red carpet in Los Angeles from the day’s events, Zach Galifianakis told USA Today that the victims of the Oklahoma tornadoes were in his thoughts.

“You just have them in your thoughts,” The Hangover actor said. “Just like with any disasters, you feel silly doing a red carpet thing.” 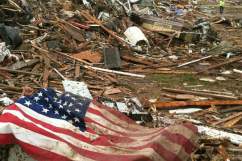 The tornado that hit Moore, Oklahoma on Monday registered as an F5, reaching 200 mile per hour winds and spanning over a mile wide. After destroying everything in its path for 45 minutes, the town was left in ruins.

“All of this is very bizarre to me and silly,” Galifianakis said. “The worship of celebrity culture is bad for our culture, to be honest. And I think this is bizarre, all of it is bizarre, but as far as Oklahoma, obviously, you just hope and pray that things will turn up.”

Loading more stories
wpDiscuz
0
0
Would love your thoughts, please comment.x
()
x
| Reply
Zach Galifianakis told reporters from the red carpet of "The Hangover Part 3" premier that the victims of the Oklahoma tornadoes were in his thoughts.