Replacing former Boston Celtics coach Doc Rivers, Brad Stevens has accepted the position as the team’s new head coach and is leaving behind the Butler Bulldogs. Here’s what you need to know about the new coach.

1. Brad Stevens will be Named Head Coach of the Boston Celtics on Friday

Former Butler University coach Brad Stevens, 36, has given up his position for a new one as head coach of the Boston Celtics, the school and team announced Wednesday reports Boston.com.

He is replacing Doc Rivers, who’s now with the Los Angeles Clippers. Stevens is the 17th coach in the Celtics franchise history.

The news is especially surprising because Stevens was not even listed as one of the 13 candidates that were up for the position with the Celtics. The list included college coaches Fred Hoiberg of Iowa State and Jim Larranaga of Miami, Florida.

4. Stevens is One of College Basketball’s Most Successful Leaders

In his six seasons at Butler, Stevens led the Butler Bulldogs to a 166-49 record and two trips back to back to the NCAA Tournament championship game. Despite making it to the championships, Butler lost first to Duke then to Connecticut. Stevens never won fewer than 22 games in a season.

5. The Celtics President of Operations Sees Stevens as a Great Leader

“Brad and I share a lot of the same values,” Celtics president of basketball operations Danny Ainge said in a statement. “Though he is young, I see Brad as a great leader who leads with impeccable character and a strong work ethic. His teams always play hard and execute on both ends of the court. Brad is a coach who has already enjoyed a lot of success, and I look forward to working with him toward Banner 18.”

6. Butler is Looking for a Replacement

Butler athletic director Barry Collier is now looking for a replacement as the Bulldogs prepare for their first year in a revamped Big East that includes Georgetown, Marquette and Creighton, reports The Kansas City Star.

Stevens has an impressive resume coaching at numerous big-time colleges, including Illinois and UCLA.

8. Stevens is Going to Miss Butler

“Our family is thrilled for the opportunity given to us by the leadership of the Boston Celtics, but it is emotional to leave a place that we have called home for the past 13 years,” Stevens said in a news release from Butler University. “We truly love Butler University and Indianapolis and are very thankful to have had the opportunity to celebrate so many wonderful things together. What makes Butler truly unique is the people that we have been so blessed to work with. When it comes time for our kids to look at schools, we will start with Butler University.”

“In keeping with The Butler Way, Brad has given his talent to our university with exceptional generosity, integrity and humility,” university President James Danko said. “His record as the winningest coach in NCAA history during his first six years as head coach, his leadership of Butler’s dual Final Four runs and his work ethic have made him a beloved member of our community. We have done everything we can to keep Brad here at Butler. However, the Celtics team has offered Brad and his family a unique opportunity with which no university can compete.”

Stevens played college basketball at DePauw University, where he was All-Conference. He graduated with a degree in Economics and worked at a pharmaceutical company before quitting in 2000 to become an assistant coach with Butler. In 2007 he became the head coach. 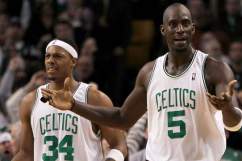