It appears that KTVU doesn’t understand how the Internet works. The San Francisco Bay area-based television station made headlines for reporting the false and blatantly racist pilot names of Asiana Airlines Flight 214, which crashed at the San Francisco International Airport on July 6, 2013.

YouTube has begun to remove the videos due to KTVU’s copyright infringement claims. In the station’s first attempt at scrubbing the Internet clean of their big mistake, several videos now show the usual YouTube apology notice.

The TV station was recently relieved when Asiana Airlines decided to drop its defamation lawsuit, following an NTSB statement taking responsibility for confirming the names. An intern was blamed and fired for wrongfully identifying the names.

Media outlets across the country took shots at KTVU for their on-air gaff, including Stephen Colbert. Check out his take on the situation below. 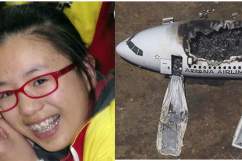 Teenager in Asiana Plane Crash Was Killed by Fire Truck