The graphic displaying the incorrect and racist names that were shown during the broadcast. (Photo courtesy of Twitter)

The NTSB intern responsible for “confirming” the fake names of the crashed Asiana Flight 214 pilots has been fired. 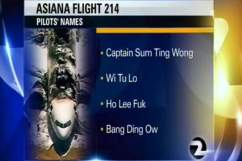 On the evening of Friday, July 12, San Francisco-based TV station, KTVU broadcasted four names assumed to be those of the pilots on board Flight 214. The names, “Captain Sum Ting Wong,” “Wi Tu Lo,” “Ho Lee Fuk” and “Bang Ding Ow,” have caused significant controversy and has resulted in a lawsuit from Asiana Airlines against the station. KTUV has claimed that the names were confirmed by the NTSB. The source within the NTSB was an unnamed intern, who has since been fired from the agency

Despite the apologies issues by the NTSB and the television station, Asiana Airlines still plans to proceed with its defamation lawsuit. Asiana spokeswoman Lee Hyomin has said the airline will “strongly respond to its racially discriminatory report.”