Here is the video that caused controversy yesterday and was taken off Youtube. Warning, the video above contains a scene of a beloved historic figure having simulated sex in order to blackmail a slave master with a sex tape.

Yesterday, hip-hop mogul Russell Simmons launched “All Def Digital,” a new Youtube Channel that instantly got criticism when it posted a comedy video of Harriet Tubman having sex with a slave master so that a slave hiding her closet film a sex tape in order to blackmail the master.

After public outrage, the video was removed and Russell Simmons posted an apology on the political/journalist arm of his empire, the Global Grind:

In the whole history of Def Comedy Jam, I’ve never taken down a controversial comedian. When my buddies from the NAACP called and asked me to take down the Harriet Tubman video from the All Def Digital Youtube channel and apologize and, I agreed.

I’m a very liberal person with a thick skin. My first impression of the Harriet Tubman piece was that it was about what one of the actors said in the video, that 162 years later, there’s still tremendous injustice. And with Harriet Tubman outwitting the slave master? I thought it was politically correct. Silly me. I can now understand why so many people are upset. I have taken down the video. Lastly, I would never condone violence against women in any form, and for those I offended, I am sincerely sorry.

In an announcement Simmons released with the launching of the channel he said that All Def Digital would serve to promote a Youtube network that, “reflects the incredible diversity of the new America.”

I I guess I have a sensitivity chip missing. Lol. Haven't been in trouble since defjam. Sorry if people r hurt 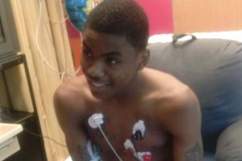