MSNBC confirmed on Thursday that Alec Bladwin has signed on to host a late night talk show called Up Late With Alec Baldwin, reports The New York Times.

Network President Phil Griffin said the 30 Rock star would conduct interviews related to current events and culture once a week, filing the 10 p.m. Friday slot. The show is set to begin in October.

The actor previously has been hosting WNYW podcast Here’s the Thing where he has interviewed everyone from Chris Rock and Lena Dunham to New York Times editor Jill Abramson and PETA’s Dan Mathews. Baldwin has expressed interest television interview show.

“After two seasons of my WNYC podcast, I’ve developed a fondness for hosting a show that involved talking with smart, talented and engaging people in every imaginable field,” Baldwin said in a statement. “I’m grateful to MSNBC for helping me bring a similar show to television.”

The show is set to begin in October. 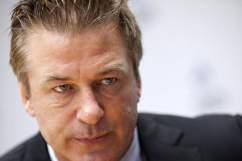