Season three of everybody’s favorite political drama-thriller Homeland premiered tonight on Showtime. The episode, titled Tin Man Is Down, takes place about two months after the events that occurred in the finale of season two.

As a refresher: While a memorial service is being held for Vice President Walden (James Sheridan) at the CIA headquarters in Langley, Virginia, a bomb is detonated and kills over 200 people. Brody (Damian Lewis) is named the suspect after his suicide bombing confession video is leaked by an unknown source. Carrie (Claire Danes) helps Brody obtain a fake passport and some cash and tells him that she will help clear his name. After seeing Brody off, she heads back to the CIA headquarters and runs into Saul (Mandy Patinkin), who is relieved to find that she hadn’t been killed in the bombing.

1. Quinn Is Up to Something

The episode opens up to Agent Peter Quinn (Rupert Friend) hunched over a dining room table, seemingly building a magnetic IED. As we have learned from the previous episodes, Quinn’s motives and morals are never quite clear. But this scene proves that he is a capable bomb maker.

2. Carrie is in Trouble

Carrie is shown testifying before the Senate Select Committee on Intelligence 58 days after the attack at Langley. Senator Lockhart (Tracy Letts) reveals a memo that offered Brody immunity for his help in killing or capturing Nazir. Carrie is blindsided by this and her lawyer asks to adjourn the hearing; Lockhart postpones the hearing until the following day. Somebody at the CIA is leaking info to the Committee and nobody knows who. The next day Lockhart questions where Carrie was the 14 hours after the attack when her statement claimed she was unconscious. Carrie states she didn’t know this was a trial and invokes her Fifth Amendment rights.

3. Saul is Weighing His Options

Next, Saul is shown with CIA operations director Dar Adal (F. Murray Abraham). Adal is attempting to get Saul to let Carrie fend for herself, but Saul won’t throw her under the bus. Saul then informs Adal that somebody at the agency is leaking information to the Senate Select Committee on Intelligence about the Langley bombing; Adal promises to remain vigilant and inform Saul if he hears anything about a leak.

We then cut to Dana Brody (Morgan Saylor) at a rehab center for troubled teens. We find out that she had slit her wrists in a bath tub after the Langley bombing. After she is released to her mother, Jessica Brody (Morena Baccarin), we learn that the family is struggling financially and Jessica, who is now going by her maiden name, is looking for a job and is worried about how she is going to pay for Dana’s continued psychiatric care. As the family gets harassed by reporters, Dana looks for solace in a sexting relationship with a boy she met at the rehab center, Leo Carras (Sam Underwood).

Back at CIA headquarters, Saul is deciding how to retaliate for the Langley bombing attack. The Iranian mastermind of the attack, Majid Javadi, or “The Magician”, hasn’t been seen in public since 1994. Six other members of the network that planned and carried out the attack on Langley have been located by the CIA. After weighing his options, Saul orders their simultaneous assassination. Peter Quinn is in Caracas, Venezuela, where he decides not to plant the bomb we saw him making in the beginning on his target’s car because he has a little boy in the backseat with him. Saul then orders him to attempt to kill his target, moniker “the Tin Man”, by infiltrating his home. Quinn succeeds, but kills inadvertedly kills the little boy anyway while doing so.

In a poignant scene with her father Frank Mathison (James Rebhorn), Carrie is called out for being off her lithium. She denies his accusations at first, but then finally admits to him and tells him that she’s medicating herself in other ways: exercise and alternative medicine. The scene takes place in front of a giant map Carrie has set up in her living room of Brody sightings.

7.Saul is Having Trouble At Home…Again

It has been over two months since Saul’s wife Mira (Sarita Choudhury) returned from Mumbai, but their relationship remains unclear. Saul has taken to drinking more, and Mira and him sleep in different bedrooms. Mira confronts him for answers, but Saul has nothing to say.

8. Carrie Goes Off the Deep End

After another rough day the Senate Select Committee on Intelligence, Carrie goes to the liquor store and runs into another man buying liquor. They end up getting drunk together and having sex on her stairwell.

The next morning, Carrie wakes up hungover to a phone call from her dad. Her dad reads her the headlining newspaper article: “A CIA agent may have had a sexual relationship with Nicholas Brody.” Carrie rushes to get herself together before confronting Saul. Finding him at a restaurant celebrating the Tin Man takedown with other CIA employees, including Adal, she then loses it on him. Adal warns her: “You’re making a big mistake, Carrie”, which she perceives as a threat. Kicking and screaming, she is thrown out of the restaurant by CIA agents.

After the newspaper article is released, Saul is called before the Intelligence Committee to comment on the unnamed person in the newspaper article. He reveals that the person is Carrie and that she has been diagnosed as bipolar, which she had concealed from the CIA. He then also reveals that she was concealing her affair with Brody. Carrie distraughtly watches Saul’s testimony on live television.

Looks like we have a good season ahead of us. Definitely a 9/10. 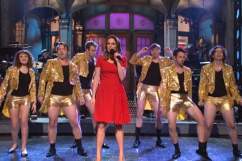