Kathleen Garde, or Kathy to her friends, 63 a resident of Woodbridge, Virginia was a financial analyst for a company contracted by the US Navy, reports The Associated Press.

Here’s what you need to know about this hero…

1. Gaarde’s Husband Sent a Heartbreaking Email to The Associated Press

Gaarde’s husband, Douglass, upon learning of his loving wife’s death at the hands of crazed gun man at the Wasington Navy Yard on September 16, wrote:

Today my life partner of 42 years (38 of them married) was taken from me, my grown son and daughter, and friends. We were just starting to plan our retirement activities and now none of that matters. It hasn’t fully sunk in yet but I know I already dearly miss her. 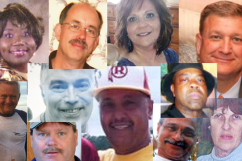 2. She Was a Lifelong Hockey Fan

To those who knew her well, aside from her husband, Gaarde’s love was the NHL team The Washington Capitals. According to WJLA, she was a season ticket holder for 25 years.

3. She Was a Chicago Native

Gaarde was born and raised in Chicago and later attended Florida State University. She moved to the D.C. area a little under 40 years ago.

4. One Neighbor ‘Couldn’t Believe Someone Would Want to Harm Kathy’

The shock felt by her neighbors was reported by The Washington Post. One neighbor, Patrick Bolton said:

She was a very sweet woman, I can’t imagine her having a single enemy.

Patrick’s other, Vicki said of her:

Gaarde’s sister, who was not named, told The Associated Press:

She was a very gracious person and very welcoming.

An animal lover, Gaarde could often be seen walking her dogs throughout the neighborhood. The New York Times reports:

She was a frequent presence at the Occoquan Bay National Wildlife Refuge in Woodbridge and played an important part in the bluebird program, said Amanda Daisey, the assistant refuge manager.

Fittingly her husband asked that any donations should be made in her name to the Humane Society. 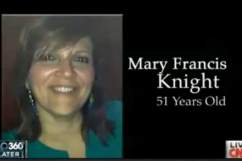 5. Gaarde is Survived by Her Husband and 2 Daughters

Both of her daughters are reported to be “grown,” with one, Jessica, said to still live at home. Patrick Bolton spoke about what a good mother she was, saying:

Instead of yelling at them, she would just tell them what to do in a positive way.

Read More
5 Fast Facts, Kathleen Gaarde, R.I.P., Washington Navy Yard Shooting
Gaarde has been described by those who knew her as "simply the nicest woman."