Thursday morning in Stockholm, the Nobel Prize committee awarded the 2013 Nobel Prize for Literature to 82-year-old Canadian short story writer Alice Munro. You can watch the video of the announcement where a shocked crowd welcomes the news that the award would go to a “master of the contemporary short story.”

She is the author of 14 original collections of short stories ranging chronologically from 1968 to 2012.

Here is what you need to know about the big win:

Alice Munro’s writing career began at a very young age when, in 1950, while attending the University of Western Ontario, she published a short story. “The Dimensions of a Shadow” ran in Folio magazine and has been published numerous times since.

Her first collection of stories, Dance of the Happy Shades, was published in 1968 sparking a long career. Listen to a 1979 interview with her above.

2. She is the 13th Female Winner of the Prize

Today Munro becomes the 13th woman to in the prize, following the 2009 Nobel Prize for Literature won by Hera Müller.

Watch another wonderful interview with Munro following the release of her 2012 book.

3. The First Canadian Winner in 30 Years

After receiving her award, Munro’s publisher Penguin Random House saying that she was, “amazed, and very grateful. I’m particularly glad that winning this award will please so many Canadians. I’m happy, too, that this will bring more attention to Canadian writing.”

Munro, still a resident of Ontario, was the third recipient of the prize. 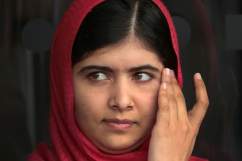