Photo of Rob Ford from the alleged night when a video was taken that shows him smoking crack.

Remember the Toronto Mayor that Gawker was after due to an alleged video that featured him smoking crack? Well it seems the Toronto Police have not forgotten.

Earlier this month, Ford’s friend and one-time driver Alexander “Sandro” Lisi was arrested on various drug and trafficking charges. New court documents, which you can read in full below, reveal that the police probed into Rob Ford during their investigation of Lisi.

The documents reveal that Lisi may have tried to procure, for Ford, the video that allegedly depicted him smoking crack. The documents show this overlapped with an ongoing investigation into the video. Police this morning confirmed that upon searching Lisi’s property, a video was recovered consistent with media reports.

Two of those video files recovered are relevant to the investigation. One of those is consistent with what was described in media: Blair.

Read the full 247-page document below: 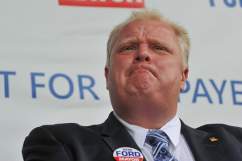