Today thousands of people descended on Washington D.C. to protest massive drag net surveillance conducted by the NSA and exposed by former NSA contractor and whistleblower Edward Snowden. You can watch the live stream of the event here all day.

The rally was organized by the Stop Watching Us coalition with is made up of hundreds of tech and political organization including the ACLU, Restore the Fourth, and Demand Progress. 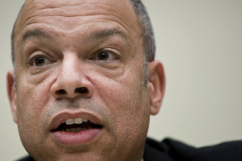