Stanley Kauffman, the long time film critic for The New Republic died from pneumonia at St. Luke’s Hospital at the age of 97. Here are five fast facts you need to know.

He’s been writing for The New Republic for several decades with his first review for the magazine being The Story of the Kelly Gang, a 1906 film considered to be the first full length film. He coined the term “film generation” that captured the rise of brand new critics during the 1970’s. He was a champion of controversial directors at the time like Ingmar Bergman and Jean-Luc Godard.

2. Kauffman Has Reviewed Other Genres

The critic has dived into other fields like books and theater. Kauffman’s first love has always been the stage. Drama criticism was a side job for him. In 1966, he took a break from film reviews to serve as the chief theater critic for The New York Times.

3. Kauffman Was The One Of The Great Critics

Considered to be one of the most respected critics along side Roger Ebert, Kauffmann was part of the documentary For The Love of Movies: The Story of American Film Criticism. His segment focused on the origins of American film criticism and thought that poet Vachel Lindsay who declared that the arrival of film made an impact on human consciousness.

4. Kauffman Was An Accomplished Novelist

Ten Films was arguably one of the most popular books he wrote. (Amazon)

The critic wrote about 11 different novels throughout his career. Falling under the non-fiction category, these books focused primarily on criticism of the arts. Known for his diversity, Kauffman constructed several tomes offering his opinion on film and theater. Serving as the editor for Alfred A. Knopf, the writer discovered Walker Percy’s “The Moviegoer” and brought the masterpiece to the public’s attention. It went on to to win the National Book Prize Award.

The New Republic will be hosting a commemoration for him but have posted this entry on their site. The only tributes up on the site are from James Wolcott and David Denby. Denby, one of the film critics for The New Yorker, talks about reading Kauffman’s work and discovering a new masterpiece every week. Wolcott, staff writer for Vanity Fair, praised Kauffmann’s approach towards reviewing each film on a case by case basis. 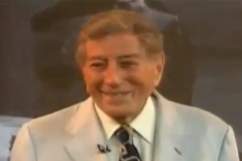 WATCH: Tony Bennett Sings ‘One For My Baby’ on Today Show