Priscah Jeptoo of Kenya has triumphed in the 2013 NYC Marathon, cruising to victory in a time of 2:25:07.

The 29-year-old Olympic silver medalist and fifth Kenyan woman to win the NYC Marathon engineered a remarkable come-from-behind victory, churning her legs with her unorthodox form to overcome a more-than-3-minute deficit and seize the $600,000-plus prize.

At Mile 23, Jeptoo overtook Bizunesh Deba, a 26-year-old native Ethiopian and adopted New Yorker, who held a commanding lead for most of the race but finished in second. The crowds were pulling for Deba, who lives and trains in the Bronx, but Jeptoo flew past Deba and never looked back.

Jeptoo fell well short of her personal best marathon time; she won the 2012 London Marathon in 2:20:14. 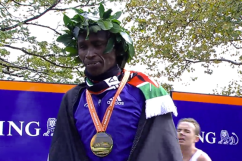