Jordan wore the shoes against the Utah Jazz during Game 5 of the 1997 NBA Finals. Despite visibly suffering from flu-like symptoms, he scored 38 points and helped the Chicago Bulls take a decisive 3-2 advantage in the series.

The shoes were brought to the market by Grey Flannel Auctions and consigned by Preston Truman, a former Utah Jazz ball boy. According to ABC News, Truman kept the shoes, which are also autographed by Jordan, locked in a safe-deposit box in Utah for more than 15 years.

The $104,765 price tag eclipsed the previous record for a pair of game-worn shoes – also worn by Jordan.

The identity of the winning bidder has not been publicized yet.

Check out the video below to hear Truman discuss the sneakers: 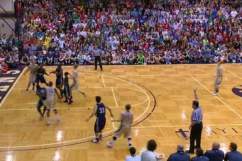