The six finalists for the 2013 Heisman Trophy were announced on Monday. Without further ado, here they are:

Winston, who has led the Seminoles to a perfect 13-0 record and a date with the Auburn Tigers in the national championship game, is the overwhelming favorite to win the Heisman. The 6-foot-4, 228-pound Bessemer, Alabama, native has put together arguably the best season ever for a freshman quarterback, amassing 3,820 yards passing and 38 touchdowns.

Lynch joins Marshall’s Randy Moss (1997) and Chad Pennington (1999) as the only finalists in history from the Mid-American Conference. The 6-foot, 216-pound senior put up numbers too big to ignore this season while leading the Huskies to an impressive 12-1 record. The dual-threat signal caller passed for 2,676 yards, ran for another 1,881 and scored 45 total touchdowns.

Manziel seeks to become the second player in history to win two Heisman Trophies. Archie Griffin, who won the award in 1974 and 1975, is the only player to accomplish that feat. The electrifying redshirt sophomore used both his arm and feet to account for over 4,400 total yards and 41 touchdowns this season.

Mason looks to become the fourth Auburn player – and second in the last four years – to win the Heisman. With 1,621 yards rushing and 22 touchdowns, the 5-foot-10, 205-pound junior has spearheaded the country’s top ground game and played a crucial role in the Tigers’ magical run to the national championship.

McCarron, who led Alabama to back-to-back national championships in 2011 and 2012, is the third Crimson Tide player in the last five years to be named a finalist. The 6-foot-4, 214-pound senior compiled 2,676 yards and 26 touchdowns through the air this season while completing nearly 68 percent of his passes.

Andre Williams’ record-shattering season running the football for Boston College went largely under the radar in an ACC dominated by Jameis Winston and Florida State. The 6-foot, 227-pound senior led the country in most rushing categories this season, including yards (2,102), attempts (329), 200-yard games (five) and 250-yard games (four). 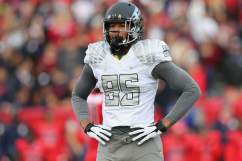