Kevin Roose of New York Magazine infiltrated Kappa Beta Phi, a secret, invitation-only fraternity composed of so many titans of finance that, in Roose’s words, if you dropped a bomb on the roof of their party, “global finance as we know it might cease to exist.”

Here’s what you need to know about the world’s most powerful fraternity:

1. It Functions as a Friar’s Club Roast for the 1 Percent

The Wall Street chapter of Kappa Beta Phi meets only once a year, always at the St. Regis Ballroom in New York City. Roose snuck into the group’s 80th annual black-tie dinner in January 2012. In his initial write-up from that time, Roose explained that evening’s agenda was to install new officers for the coming year, and to haze “worthless neophytes,” those newly invited members who were made to don “wigs, gold-sequined skirts and skin-tight tops and put on a comedic variety show for the enjoyment of the other members.”

Roose elaborates on his account of the evening in his new book Young Money, which was excerpted today in New York Magazine.

Ross was anointed “Grand Swipe” for the evening, just one of the many odd names reserved for the frat’s leadership, with “Grand Smudge,” “Grand Loaf” and “Master at Arms” being the others.

And they proceeded to do copious amounts of both. Much rack of lamb and foie gras was ingested, much champagne and scotch imbibed. And through it all those junior bankers and late blooming executives ingratiated themselves to their higher-ups by adorning in the vestments of the fairer sex and performing their sloppy cabaret.

In Roose’s account, the satirical sketches ranged from sexist, to reactionary, to self-congratulatorily self-deprecating.

Q: What’s the biggest difference between Hillary Clinton and a catfish?
A: One has whiskers and stinks, and the other is a fish.

Top Blackstone executive Bill Mulrow and former secretary of the Treasury Emil Henry performed a two-man routine in which Mulrow played a liberal radical, dressed in “raggedy, tie-dye clothes,” and Henry “played” a callous baron of industry, shouting “Bill, look at you! You’re pathetic, you liberal! You need a bath!”

Investment banker Warren Stephans sang a song about the financial crisis, set to the tune of “Dixie”:

“In Wall Street land we’ll take our stand, said Morgan and Goldman. But first we better get some loans, so quick, get to the Fed, man.”

Finally, all the neophytes swapped their drag for Mormon missionary costumes and sang an adaptation of “I Believe” from the hit musical “Book of Mormon,” with lyrics like “I believe God has a plan for all of us. I believe my plan involves a seven-figure bonus.”

3. It Was Founded on the Eve of The Great Depression

According to Wilbur Ross’s opening speech, Kappa Beta Phi was founded in 1929, by “four C+ students at William and Mary.” The fraternity’s name is a play on that of the honor society Phi Beta Kappa. An odd wrinkle here, then, is that those elites who most champion the notion of American meritocracy, who insist that whoever works hardest and produces the most value in our society reaps its greatest rewards, all belong to a club whose founding ethos was disdain for fey over-achievers, in favor of macho hedonism. According to Wikipedia, by the 1930s the fraternity’s original, non-Wall Street chapters were the bane of many campus presidents, who sought to abolish clubs “characterized as … solely for drinking and partying while making a mockery of academics.”

The Wall Street contingent was founded in 1929, just before the stock market crash, later taking on the aim of keeping alive the spirit of those good old pre-depression days, when fat cats grew ever fatter, seemingly immune to whatever economic struggles dominated the lives of the unfortunate masses. By all appearances, Kappa Beta Phi has been a smashing success.

The new and most riveting part of Roose’s account concerns his experience of being outed as an undercover reporter.

Roose explains that getting into the function was “shockingly easy,” requiring only a rented tuxedo and brisk walk past the sign-in desk. To avoid answering questions, Roose became consumed by his iPhone once he arrived inside.

But toward the night’s very end, while attempting to film the neophytes’ Book of Mormon-inspired finale, he was confronted by former Army helicopter pilot turned Fortress Investment Group founder Michael Novogratz, who shouted “Who the hell are you?”

The ethics policies of The New York times forced Roose to confess that he was a reporter. Novogratz then demanded he hand over his iPhone, shouting “Give me that or I’ll fucking break it.”

Other, more diplomatic bankers restrained Novogratz and attempted to bribe Roose out of his story, promising to become useful sources in exchange for deference to their privacy.

Roose proceeded to publish his article detailing the event in the next week’s Times.

The hook for Roose’s New York Magazine piece is his sense that this party he witnessed may help explain the twisted persecution complex evidenced by several of the world’s most privileged humans over the past few weeks. There was venture capitalist Tom Perkins likening the plight of the rich to that of Jews at Kristallnacht, former Morgan Stanley head John Mach calling for people to stop “beating up” on JP Morgan’s Jamie Dimon, and Grand Swipe Wilbur Ross himself lamenting that “the 1 percent is being picked on for political reasons.”

Roose argues that treating the financial crisis as light comedy, fit for burlesque, betrays a sociopathic disconnect from the incalculable pain and loss that crisis brought into the lives of millions of Americans:

“Perhaps, I realized, this social isolation is why despite extraordinary evidence to the contrary, one-percenters like Ross keep saying how badly persecuted they are. When you’re a member of the fraternity of money, it can be hard to see past the foie gras to the real world.” 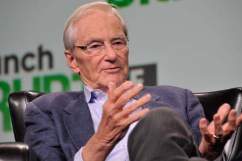