The eyes of the world are on the Andaman Islands today as new revelations in the investigation into the disappearance of Malaysia Airlines Flight 370 suggest the lost plane may have reached these remote Indian Islands.

The plane was last heard from very early on the morning on March 8. It was carrying 227 passengers and 12 crew from 15 different countries.

The new information is still under debate, with doubt over how the plane could make it to the islands undetected. The Indian military launched a search mission that will cover the islands.

1. The Islands Have a Runway Long Enough for the Plane to Land

A CNN report into the islands’ airport says that one of their runaways is long enough to support a Boeing 777 jet. The longest runway is 10,794 in length, a couple of thousand feet longer than what’s needed to land a 777 in bad weather conditions.

The airport is located in the islands’ capital city Port Blair on the east side. It is used for civilian traffic and by the Indian Navy, and the Indian Airport Authority operates it.

Denis Giles of The Andaman Chronicle newspaper said, “There is no chance that any aircraft of this size can come toward Andaman and Nicobar islands and land.”

2. There Are Very Few People on the Andaman Islands

Native people on the Andaman Islands in 1926. (Getty)

The islands, property of India, are made up of 572 different land masses that collectively cover 850 square miles. Only 36 of these islands have people on them. The total population is close to 380,000. That population is made up of many different tribal groups. Due to declining resources, the population are listed as “particularly vulnerable.”

Indian army rangers on the islands in 1997. (Getty)

In total, India lost 11,000 citizens during the 2004 tsunami. On the Andaman Islands, 2,000 people lost their lives and 4,000 children lost a parent or were orphaned. More than 40,000 people were left homeless after the event. It’s frequent for the islands to be hit by natural disasters. A 2.5 magnitude earthquake struck near the island around the time that the Malaysia Airlines flight went missing; suspicion that the seismic readings indicated a crash has been dispelled. 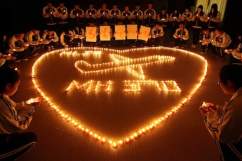 4. The Capital Was Set Up as a Penal Colony

One of the original prison colonies in Port Blair. (Wikipedia)

In the 1790s, parts of the islands were settled as the British Empire opened a penal colony in Port Blair. They remained under control of the British until the Japanese invaded during World War II. After India gained independence in 1947, they took control.

5. Marco Polo May Have Been There

It’s speculated that in the 13th century, Marco Polo was a visitor to the islands. In one writing, Polo wrote about islands that he called “Angamanain.” It’s believed he was talking about the Andaman Islands. He describes the inhabitants of “Angamanain” as being cannibals and having heads like dogs.

A Sherlock Holmes mystery, The Sign of the Four, was set in part on the islands.