March 8 marks the worldwide holiday International Women’s Day, which celebrates the accomplishments and struggles of women everywhere. Google is celebrating the event with a Google Doodle and video that first went live in the UK.

Here is what you need to know about this global celebration of womanhood and Google’s tribute:

1. The Video Features Notable Women From Around the World

According to Google, the video, which you can watch above, features more than 100 notable and important women from dozens of countries.

Among the women, who each get around 2 or 3 seconds, are a few recognizable faces like women’s education activist Malala Yousafzai and Trans activist and author Janet Mock.

Also among those included are Ph.D. candidate and the first woman to surf in Iran, Easkey Britton; Dalia Grybauskaite, the president of Lithuania; and the best female soccer player in the world, Marta Silva.

2. The Holiday Was First Celebrated During the Suffrage Movement

International Women’s Day has its root in the American suffrage movement. Around 1910, progressive and socialist women in American cities organized an international women’s conference in order to forge female solidarity before the Second Socialist international.

3. It Was Made an Official Holiday in the Soviet Union in 1917

October 1917: Women marching during the Russian Revolution, demanding the right to vote. (Getty)

The United Nations has declared that the theme for this year’s International Women’s Day is “progress for women is progress for all.” Above you can hear the UN Women Executive Director Phumzile Mlambo-Ngcuka discuss the holiday, its significance, and what it means for 2014.

Previous year’s themes have been, “Time for Action to End Violence Against Women,” and “Women and the Peace Table.”

In a statement released by Google about the Women’s Day doodle, the company said:

Women have historically been underrepresented in almost all fields: science, school curricula, business, politics — and, sadly, doodles. In addition to our continued effort for doodle diversity and inclusion, this truly International Women’s Day doodle features a host of over a 100 inspiring women from around the world. 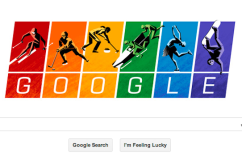 Loading more stories
wpDiscuz
0
0
Would love your thoughts, please comment.x
()
x
| Reply
International Women's Day on March 8 is commemorated by a Google Doodle with a video of notable women from around the world.