Here’s what you need to know about Snoop junior:

1. Keyshawn Johnson Wants Him at USC

Despite being a huge fan of USC, Snoop says he’s holding on to see what the best deal is for Cordell. One of the school’s legends, Keyshawn Johnson, told TMZ that he feels Cordell is “made” to play for USC. Speaking to the gossip site, KJ said that the acquisition of Cordell would help his alma-mater “get back there.”

2. He’s Among the Top 5 Wide Receivers in the Country

According to stats site 247 Sports, Broadus, a junior this year, is ranked No. 72 of overall class of 2015 high school players. He’s also among the top five receivers in the nation. In 2015, he’s scheduled to play in the U.S. Army All-American Bowl.

In 2013, Broadus left his California-based high school, Diamond Bar, for Nevada-based football stronghold Bishop Gorman. He won’t be the only player on the team with a celebrity father; UFC CEO Lorenzo Fertitta’s son, Nicco, also plays as a safety for the team. Nicco Fertitta has been offered a scholarship by Notre Dame. 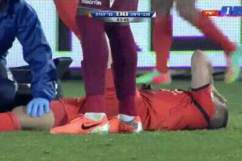 WATCH: One of the Most Brutal Soccer Tackles of All Time

During the 2013 season, Cordell attracted controversy when he threw a punch at a rival player.d The incident occurred during a mass brawl that broke out in a game between Diamond Bar and Diamond Ranch.

5. He Was Trained in Soccer by David Beckham

Cordell Broadus is the second eldest son of Snoop Dogg and the rapper’s high school sweetheart Shante Taylor. In his younger years, Cordell was also an avid soccer player and even received training from the legendary David Beckham.