Embattled LA Clippers owner Donald Sterling has been banned for life from the day-to-day running of the team and banned from the NBA. Last week, audio was leaked of Sterling speaking to a female companion, believed to be V. Stiviano. On the tapes, Sterling made controversial, racist, statements. Adam Silver told the media at a press conference: “The views expressed by Mr. Sterling are deeply offensive and harmful.”

It was rumored that he would also face a fine of $5 million that number was later confirmed to be $2.5 million. According to Forbes, Sterling’s net worth is at $1.9 billion. Dallas Mavericks owner Mark Cuban had said that he thought the NBA would fine and suspend Sterling but that he didn’t feel the Clippers owner should be made to sell his team.

2. The NBA Will Have to Approve his Successor

Sterling will need to appoint someone to run the team day-to-day. The NBA will have final approval on who he picks. According to TMZ, the suspension does not extend to his family members. Silver added that he will do everything to force Sterling to sell the Clippers. 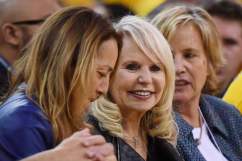 3. Sterling Confirmed it’s Him on the Tape

NBA lawyers confirmed earlier that the voice on the leaked tape was in fact Donald Sterling. They found no evidence that the tapes had been edited in any way. Adam Silver told the media that Sterling has further confirmed it’s his voice on the tape.

4. Sponsors Are Leaving the Clippers in Droves

The outrage over Sterling’s comments led to a mass exodus Monday of major corporate sponsors for the Clippers.

Among those fleeing were State Farm Insurance, the Virgin America airline, Mercedes-Benz and Kia. The terms of the Clippers’ deals with the corporate giants are not public, so it’s not clear how much money Sterling’s organization stands to loose. But it’s clear Sterling has become poison to any business relationship.

AdAge’s Michael McCarhty points out that the loss of Mercedes-Benz is likely particularly painful for Sterling:

With dealerships across Beverly Hills and other swanky Southern California locales, Mercedes is one of the Clippers’ biggest, most high-profile sponsors. Given Mr. Sterling’s alleged disdain for lower and middle-class fans, Mercedes is probably the kind of sponsor the billionaire owner covets.

The Sterling controversy has created a complicated dynamic for Clippers players, coaches and fans, who want the team to succeed but Sterling to fail. The team lost its first playoff game since Sterling’s comments were made public Sunday at Golden State. But with the Clippers first-round playoff series against the Warriors tied at two games apiece, the series shifts back to the Staples Center in L.A. Tuesday night.

Rivers (pictured above) issued a lengthy statement Monday imploring fans to pack the arena and continue to support the players in spite of their disgust for Sterling:

We want to make the right decisions here. We’re doing our very best to try and do that. We know that fans are in a dilemma as well. We want them to cheer for their players and their team. It will always be their players and their team. From the fans that I have heard from, that’s how they feel. ‘This is my team. These are my players that I’m cheering for and that’s not going to change.’ I hope STAPLES Center is packed and people are cheering for the players. The players are now in the middle of this, and they have to deal with it.

Read More
5 Fast Facts, Basketball, Breaking News, Donald Sterling, NBA, Sports
Follow Heavy ↓
NBA Commissioner Adam Silver told the media that he will do everything in his power to force Sterling to sell the Clippers.