A baby zonkey named Khumba was born on April 21st at a zoo in Mexico. His mother is a zebra and his dad is a donkey. Zookeepers say the baby hybrid was not planned, and that the birth is a miracle because their chromosomes are thought to be incompatible. The natural birth surprised everyone.

Get a glimpse at the adorable baby zonkey in this video. 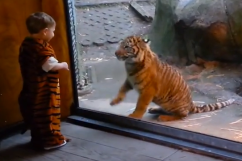 WATCH: A Young Boy in a Tiger Costume Befriends a Real Tiger Cub

Loading more stories
wpDiscuz
0
0
Would love your thoughts, please comment.x
()
x
| Reply
Get a glimpse at Khumba the zonkey, an adorable hybrid animal, in this video.