Elizabeth “Lizzy” Wilson is at the center of one of the biggest weddings on the social calendar this year. Her marriage to British nightclub owner Guy Pelly this weekend in Memphis will be attended by Princes William and Prince Harry. Wilson, an heiress to the Holiday Inn empire, is used to living the high life.

1. She Lives in London

Originally from Tennessee, Wilson lives in London, England, Pelly’s hometown. She’s a graduate of both the University of Virginia and Georgetown, according to her Facebook page. At one time she spent a semester studying in France. She has a masters in art and museum studies. Prior to college, she went to the illustrious Hutchison School in Memphis. While in college she was a member of the sorority Kappa Kappa Gamma.

The Wilson name is synonymous with the Holiday Inn empire. Lizzy’s grandfather, Kemmons Wilson, founded the business in 1951, known as The Kemmons Wilson Companies. Her father, C. Kemmons Wilson, Jr., now operates the family industry. Kemmons Wilson is said to have started the Holiday Inn company when he was disguested at the caliber of motels he was forced to stay in when taking his family on vacation. His son sold the family business in 1989 to the Bass Brewing Company, but the Wilsons came back into the fold as shareholders in InterContinental, which bought a majority of the company from Bass Brewing Company. Outside of hotels, the family business is also in insurance and financial services. They’re also active in philanthropic ventures with the University of Memphis and St. Jude’s Children’s Research Hospital.

Wilson was officially voted the Queen of the Memphis Carnival in 2003. Participation in the carnival is something of a family tradition. Her father was king of the festival in 1985 and her sister’s, Carey and Katherine, were both voted queen in 1994 and 1999 respectively.

His wedding will be quite an affair, according to USA Today. It’s a three-day event staring on Friday with a reception at the Memphis Hunt and Polo club. There will also be a trip to Graceland as part of the party. The wedding takes place on Saturday, with the weekend wrapping up back at the Polo club, which is located to the Wilson family home.

5. Her Grandfather Advised Sun Records to Sell Elvis’ Contract for Only $35,000

According to The New York Times obituary of Kemmons Wilson, he advised Sam Phillips of Sun Records, to sell Elvis’ contract to RCA for just $35,000. The decision which cost Sun Records an estimated $100 million. By way of making it up to Phillips, Kemmons Wilson got the Sun Records head in early on Holiday Inn stock, which made him a “killing,” according to the obit. The Times asked Kemmons about the selling of Elvis’ contract in 1999, he said, “Hell, [Elvis] can’t even since. Take the money.” 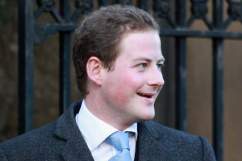 Loading more stories
wpDiscuz
1
0
Would love your thoughts, please comment.x
()
x
| Reply
She's heiress to the Holiday Inn empire, and now she's having a fairytail wedding to be attended by the British royal family.