Maya Angelou, a legendary poet, activist, and writer who inspired generations of Americans, died Wednesday morning at the age of 86. Her poetry and writing taught important lessons on resilience and activism.

She’d been very frail and had heart problems, but she was going strong, finishing a new book. I spoke to her yesterday. She was fine, as she always was. Her spirit was indomitable.

Here’s what you need to know about the American icon:

1. She Was Found Unresponsive in Her Home

Wednesday morning at around 8:15 a.m., Time Warner News reported that Angelou was found unresponsive in her Winston-Salem, North Carolina home. The cause of death was not immediately known, and memorial and funeral arraignments have not yet been released.

On May 23, Angelou announced she would not attend the MLB Beacon Awards, where she was being honored. The AP reported that she cited “health Reasons” when declining the invitation. In April, Angelou was hospitalized when an “unexpected ailment” prevented her from attending an event in Arkansas.

3. She Was the Second Poet in History to Read a Poem at a Presidential Inauguration

Angelou made history in 1993 when she became the first black poet and the first female poet (and just the second overall) to recite a poem at a presidential inauguration. Her reading of “On the Pulse of Morning” at President Bill Clinton’s first inauguration made her the first poet to read at an inauguration since Robert Frost read “The Gift Outright” at John F. Kennedy’s in 1961.

She won a Grammy Award in the “spoken word” category for the poem in 1994.

Watch the video of Angelou reciting the poem above, and read the full text of the poem here.

4. She Is Best Known for ‘I Know Why the Caged Bird Sings’

Angelou is best known for her immortal memoir, I Know Why the Caged Bird Sings, which was published in 1969 and covers the early years of her life. The book was followed by six additional autobiographies, each covering a section of her life.

Above you can listen to Angelou reading from “I Know Why the Caged Bird Sings.”

5. She Won the Presidential Medal of Freedom, Multiple Grammys and a Pulitzer Nomination

Angelou has received dozens of awards and honors over the years, including more than 20 honorary degrees, the Mother Teresa Award, the National Medal of Arts, the NAACP Image Award, three Grammys for spoken word recordings, the Langston Hughes Medal, a Pulitzer Nomination, and a Tony nomination. Angelou also won the highest honor an American civilian can win, the Presidential Medal of Freedom, which you can see a picture of her receiving above. 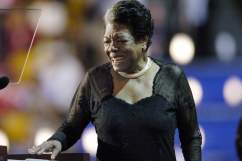 Loading more stories
wpDiscuz
0
0
Would love your thoughts, please comment.x
()
x
| Reply
Maya Angelou, the beloved poet and activist, died at the age of 86. Here is what you need to know.