Priscilla Chan finds her noted fame as Mrs. Mark Zuckerberg “incredibly odd” for a medical resident. People want to know more about the woman who makes up one half of the power couple, who married in May 2012, and Chan gave some insight into her life before and after meeting the Facebook founder in an interview with the Today show on May 30.

Zuckerberg and Chan announced their donation of $120 million to Bay Area public schools through their education foundation, Startup: Education. Read on to see how much Chan values education, what she really thinks of her husband’s hoodies and how the computer programmer swept Chan off her feet.

1. Chan Was More Important to Zuckerberg Than a Take-Home Test

Chan met Zuckerberg waiting in line for the bathroom at a Harvard fraternity party thrown in his honor after he pulled a prank that had him on the cusp of expulsion. The future wife of the prankster found Zuckerberg to be a “really interesting guy, who really wasn’t that studious.”

His pickup line didn’t encourage her confidence in his study skills either, she told Today’s Savannah Guthrie.

“On our first date, he told me that he’d rather go on a date with me than finish his take-home midterm. The type-A first child in me was appalled.”

That’s not as bad as the conversation his Social Network character had with an ex-girlfriend, shown in the video below.

She learned quickly the two didn’t share the same study habits, but that Zuckerberg was “very bright.” Forbes pegs the Facebook mogul’s net worth at $28 billion and Chan’s stands at $14 billion due to her marriage status with Zuckerberg, according to Celebrity Net Worth. It’s unknown whether the couple signed a prenuptial agreement, but because the couple married the day fter he took Facebook public, Zuckerberg’s stock earnings remain his alone in the event the couple divorces due to California law.

2. She’s the First to Graduate College in Her Family

Chan’s parents immigrated to America on refugee boats, and gave their daughter and her two sisters, Michelle and Elaine, the chance of a better life and education. The eldest daughter of the Chan family, Priscilla was the first to graduate from college, receiving an undergraduate degree in biology. She taught for a year as middle school science teacher in San Jose before she enrolled in medical school, according to the New York Times.

Chan told Guthrie that “education is an incredibly personal issue” for her and credits her grade-school teachers for instilling a passion for learning in her at an early age.

“It was really my teachers that got me these opportunities to attend college, to go to medical school, and to be able to give back as a doctor today… So their effects have only compounded over time.”

There are only two places Chan will not allow her hoodie-loving husband to wear his favorite piece of clothing attire: weddings and baby showers. Otherwise, Chan is completely pro-hoodie as long as he wears a fresh one every day, she told Today.

“He has graduated to a nicer hoodie. The main quality about this hoodie that’s nicer is that it’s softer, so he’s really excited about that. I’m happy with whatever he wants to wear, as long as it’s appropriate for where we’re going.”

Like any good wife, she’s more concerned with Zuckerberg’s diet. “I’m more concerned that he eats regularly,” Chan told Guthrie. The computer whiz tends to get so excited over his work that he forgets to eats and complains of sickness and headaches later on.

4. Her Patients Keep Her Grounded

The world may know her as Mark Zuckerberg’s wife, but at works she’s just another “normal resident” trying to help people. Who she’s married to rarely comes up when she’s making the hospital rounds, she told Today in the video above.

I am in a fortunate situation, where I get to train as a doctor in a program where everyone just treats me like a normal resident. That could be good and bad. But it’s nothing glamorous. I get to have the same experience as everyone else. So it’s strange, because I don’t feel it in my everyday life. I’m just someone who’s training to be a doctor.”

Her relationship with her patients also convinced Chan to learn Spanish. She already spoke English and Cantonese at home, but Spanish allows her to “connect better with individuals if you can speak their language,” she said.

Zuckerberg Babies Are in the Couple’s Future

Chan and Zuckerberg want to have children someday, but their happy taking care of their furry Hungarian sheep dog Beast for now. Zuckerberg checks up on the dog every day to make sure he’s “really happy and satisfied.” Chan thinks this behavior is an indication of how her husband will act with real children in the future.

“We have very different approaches to Beast and so that might be duplicated when we have kids.”

The couple also considers Chan’s youngest sister Michelle their “first child” because they’ve watched her grow up together since she was 10. Her other sister Elaine had to deal with a bossy older sister, Chan told Guthrie.

“I was really uptight. I’m the oldest child. I would say I’m probably a prototypical eldest child. I bossed my middle sister around all the time.” 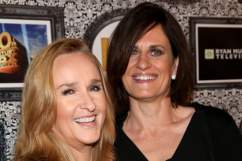 Loading more stories
wpDiscuz
1
0
Would love your thoughts, please comment.x
()
x
| Reply
Priscilla Chan, the wife of Mark Zuckerberg, prefers to keep her life private, but she gave her first-ever television interview with Today's Savannah Guthrie on May 30.