The Netherlands has been one of the best international teams in the world for the better part of a decade, and Arjen Robben is the biggest reason why.

Robben, playing in his third World Cup, led the Dutch to the World Cup final in 2010 and hopes to take the team a step further this time around. He’s a national hero in Holland and a well-known figure to fans throughout Europe because of the success he’s had playing for Chelsea, Real Madrid and Bayern Munich.

Robben failed to score on a key opportunity against Spain in Holland’s loss in the 2010 World Cup final in South Africa, but he wasted no time redeeming himself this time around, scoring two goals in Holland’s rout of Spain in the opener and leading the team to an appearance in the semifinals against Argentina.

Read on for more about Robben’s career:

Robben plays for German powerhouse FC Bayern Munich, which has won more national championships than anyone else in German history.

The team plays in Bundesliga, the top German pro league, and is a mainstay in the UEFA Champions League. Robben led them to championships in both leagues in 2013, in addition to the championship of DFB-Pokal, an annual German cup.

In March, Robben signed a two-year contract extension with Munich through the 2017 season.

In a statement put out by the club, Robben raved about his time in Munich:

I’m now in my fifth season in Munich and there will be three more after this. There can be no better indication of how happy my family and I feel to be here and how much I enjoy playing for this club and with this team. I’m looking forward to the years ahead – and to plenty more trophies with FC Bayern.

2. He Was Transferred to Munich From Real Madrid in 2009 for a Reported 22 Million Euros

Robben two largely successful but injury-plagued seasons for Spanish powerhouse Real Madrid before transferring to Munich for a reported 22 million euros in 2009.

The Dutchman was a valuable contributor in Madrid, but his presence was less necessary there when the team acquired superstars Cristiano Ronaldo and Kaka.

At the time of the transfer, Bayern Munich was managed by Louis Van Gaal, who now coaches the Dutch national team and is set to take over as manager of Manchester United after the World Cup.

“Everything went so quickly,” Robben told BBC at the time. “There were a few things that I had to consider and in the end I decided that I would like to transfer to a big club like FC Bayern.”

Robben playing for Chelsea in the English Premier League in 2004, shortly before he had surgery to remove a lump in his left testicle. (Getty)

In 2004, when Robben was a 20-year-old rising star for Chelsea in the English Premier League, doctors discovered a lump in his left testicle that needed to be surgically removed.

The experience was frightening, but following surgery doctors gave Robben a clean bill of health.

He described the experience in December 2004 to the Daily Mail:

The waiting was terrible for a few days. I didn’t know what was going to happen to me. It was a horrible wait, then I heard the news was good and it was a massive relief.

Robben is married to Bernadien Eillert, whom he’s dated since the two met while in high school in 2000. The couple has two sons named Luka and Kai and a daughter named Lynn.

The high school sweethearts were married in a 2007 ceremony and greeted by cheering guests when they emerged from the church. Watch the video above.

The Dutch, who hold the record for most World Cup final appearances without winning a title, came tantalizingly close to winning it all in 2010, but lost to Spain in extra time in the final after Robben had a clean look at the goal but failed to score.

He told the Daily Mirror:

It is part of sport, just a moment, a snapshot,” said Robben. “But it will be part of me and part of my career for all of my life. But it is the past and we are focused on this game, so it doesn’t count anymore.

He took a step toward redeeming himself Friday against Spain, helping ignite hopes throughout Holland that this will be a month to remember. 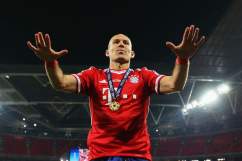 Arjen Robben Photos: The Pictures You Need to See

Loading more stories
wpDiscuz
1
0
Would love your thoughts, please comment.x
()
x
| Reply
The Netherlands has been one of the best international teams in the world for the better part of a decade, and Arjen Robben is the biggest reason why.