Algeria’s Islam Slimani has been leading the Algerian national team to victory thus far in the World cup after scoring an equalizer against Russia to get them to the knockout round for the first time in 22 years.

1. He Scored an Equalizer Against Russia to Bring Algeria to the Knockout Round

For the first time since 1982, Algeria made it to the Round of 16 thanks to Slimani’s header in the 60th minute of the Group H game vs. Russia. Algeria needed just one point to advance which was given to them by the draw.

In August 2013 Slimani joined Sporting Clube Portugal from CR Belouizda for $513,000, but was only used as a substitute until later in the season. He scpored 4 goals in 4 matches for Sport CP after becoming a starter and was voted Best Algerian Footballer of the Year by the end of the 2013-2014 season.

3. This is His First World Cup

Slimani has been on the Algerian national team since 2010 and made his first international debut in 2011. Slimani scored the first goal and an assist later in the game in the opening match against South Korea where Algeria won 4-2. He went on to put in a header in a 1-1 draw against Russia that moved them into the knockout round of the World Cup for the first time since 1982.

4. He Considered Fasting For Ramadan During the Second Round of the World Cup

Unfortunately for the Algerian national team, Ramadan falls just before the second round of the World Cup where they will face Germany, an absolute powerhouse in the 2014 World Cup. Since Algeria is a Muslim country, this puts players in a difficult position as Ramadan requires fasting for a month from sunset to sundown.

The Algerian team doesn’t wish to upset their country by ignoring the religion so strongly followed by their fans, but could be putting their health and quality of play at huge risk by not eating before and after games. What makes it worse is during fasting, followers are prohibited from drinking liquids too which is highly dangerous considering the 90 plus temperatures and high humdity in Brazil.

We need to discuss it among ourselves. It’s clear that our religion is very important for the team, so we will talk about it and see how to go forward.”

It is not allowed for an Algerian player to avoiding fasting just for a game — they must fast because God is with those who fast and young people can fast and play at the same time.”

West Ham United of the English Premier League is going after Slimani and will reportedly pay a transfer fee to Sporting CP for $8.9 million. West Ham made an attempt last January to acquire the talented striker, but failed. West Ham is looking to sign him in a permenant deal sometime after the World Cup. 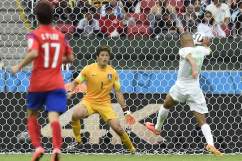 Read More
5 Fast Facts, Soccer, Sports, World Cup
Islam Slimani has been leading the Algerian national team to victory thus far in the World cup after scoring against Russia to get them to the knockout round.