The opening ceremony of the World Cup 2014 will take place at 2:15 p.m. (EDT) on Thursday, June 12, from inside Sao Paulo’s 68,000-seat New Corinthians Stadium. According to the Daily Telegraph, the celebration will last 25 minutes. After the tournament, the World Cup’s opening game kicks off between Brazil and Croatia at 4:00 p.m. (EDT). The World Cup begins in Sao Paulo on June 12 and ends on July 13. You can watch the World Cup Opening Ceremony here from 2:00 p.m. (EDT)

Here’s what you need to know about the ceremony the world will be watching:

Jennifer Lopez will perform at the ceremony. On June 9, it had been repored that Bronx-superstar was pulling out of the concert due to “production issues.” Other news that broke that day was that J-Lo was reported to have broken up with Casper Smart after allegations emerged he had been seeing transgender models on the side. Later on that night, Lopez showed up on The Tonight Show with Jimmy Fallon to perform the “Tight Pants” dance. However, a day before the ceremony, reports emerged that J-Lo would perform at the ceremony. Her spokesperson told People Magazine:

She will be there. Jennifer has always wanted to participate in the World Cup opening ceremonies. We have been trying to work out scheduling and logistics. Any statements to the contrary were premature. Jennifer would not want to disappoint her fans or fans of fútbol.

The World Cup’s official anthem “We Are One” will play a central role in the ceremony. The song will be performed by Lopez, Pitbull and Brazilian singer Claudia Leitte. The song has not been well-received and been compared unfavorably to Shakira’s 2010 World Cup song “Waka Waka.” That song was a No.1 in 20 countries. “We Are One” hasn’t been No.1 anywhere, yet.

3. There Will Be No Fireworks

The tournament takes place here, at the Corinthians Arena. (Getty)

Also featured in the opening ceremony will be 600 performers, including a cast of dancers, gymnasts, stilt-walkers, trampolinists and capoeira experts. The show’s director, Daphne Cornez, told FIFA.com, the whole show is a “tribute to Brazil and its treasures: nature, people, football.” Fans of pyrotechnics will be disappointed, as according to Cornez, because the ceremony will be on during the daytime, there will be no fireworks. 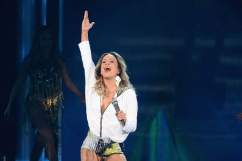 4. All Singing, All Dancing, No Speeches

Due to FIFA’s fear of democratic expression, there will be no speeches at this opening ceremony. At the opening ceremony of the 2013 Confederations Cup in Brazil, Brazilian President Dilma Rousseff was roundly booed by the crowd. The BBC reported that FIFA President Sepp Blatter has “expressed concern about social unrest” in Brazil. There has been mass protests in all of the World Cup’s host cities with citizens angry about the spiraling cost of hosting the tournament.

5. 84 Hours of Rehearsal Have Gone Into the Show

The focal point of the ceremony will be a “living” LED ball with 90,000 lights installed. By the time the ceremony starts, the dancers in the show will have rehearsed for a total of 84 hours. The show’s director, Daphne Cornez, told FIFA.com:

The Opening Ceremony is a tribute to Brazil and its treasures: nature, people football. The sense of excitement here is amazing and everyone is very motivated. It doesn’t matter whether they’re feeling tired or hot sometimes or if they have to go through routines again and again: they just keep on smiling. It’s amazing.