Xherdan Shaqiri is the World Cup’s newest sensation after scoring three consecutive goals to close out Honduras in a 3-0 victory to move Switzerland to the next round over Ecuador.

Switzerland needed Ecuador to be shut out by France while scoring 3 goals themselves in order to put them in second place in Group E in order to advance to the top 16 knockout round.

Here’s what you need to know about the Swiss talent:

1. He Had a Hat-Trick Against Honduras

Shaqiri scored Switzerland’s first goal against Honduras to put them in the lead 1-0 after just 6 minutes, followed by another in the 31st minute.

He rounded out the game in the 71st minute to get the second hat-trick of the tournament and the second Swiss player in history to accomplish that at the World Cup. The last only other Swiss player to ever do it was Josef Hügi 60 years ago.

In the 700 games played in all 19 World Cups, only 50 hat-tricks have ever been scored.

Click the links below to see all three goals.

At 22 Shaqiri has scored 3 world cup goals. I have today successfully buttered my bagel without it going through the hole in the middle.

Click here to see the making of the Coca Cola commercial featuring Shaqiri.

Shaqiri has been chosen as the promoter for not only Coca-Cola, but also for a brand by Nike. Now that he is the face of such huge endorsers, he has become a national icon in Switzerland.

3. His Transfer Fee Went Up $13.6 Million After His Hat-Trick

Shaqiri currently plays for German powerhouse Bayern Munich after being traded from FC Basel in July 2012. The transfer fee was for $15.8 million for Shaqiri’s 4-year contract for a $2.7 million annual salary.

He has made 43 appearances with 10 career goals since his debut for Bayern Munich. It looks like Shaqiri will be given a lot more playing time when he gets back to season.

4. He Scores More Goals Internationally Than in Regular Season

Although he has been playing for Switzerland since 2010 (two more years than with FC Bayern), he has only had 32 appearances, but 12 goals while for FC Bayern he has only scored 10 in 42 appearances.

5. He is 1 of 5 Muslims On Switzerland and Will Not Be Fasting For Ramadan

Switzerland’s team this year is extremely diverse and includes 5 players that practice the Islam faith including star players Valon Behrami, Granit Xhaka, Haris Seferovic, Admir Mehmedi and of course the famous Xherdan Shaqiri. Unfortunately for these players along with others still participating in the World cup like German player Mesut Ozil, Ramadan falls during the tournament for the first time in 30 years (June 28- July 28).

Each player’s parents are immigrants or are immigrants themselves of Switzerland which in February of 2014 decided to restrict immigration. What’s even more ironic is that Switzerland recently banned minarets, even though the current heroes of the country are Muslim.

Fasting during Ramadan requires Muslims so go without food and drink from sunrise to sunset, which could be extremely dangerous for the players playing in a climate like Brazil’s.

Much to the displeasure of the Muslim community, Xherdan Shaqiri, Granit Xhaka and Valon Behrami of Switzerland and Mesut Ozil of Germany have announced their decisions to skip the fasting this year for the sake of their health and quality of play. 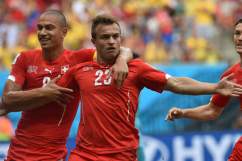 Read More
5 Fast Facts, Soccer, Sports, World Cup
Xherdan Shaqiri is the World Cup's newest sensation after scoring 3 consecutive goals to beat Honduras 3-0 to move Switzerland to the next round over Ecuador.