New York Giants wide receiver Victor Cruz proposed to his longtime girlfriend on Sunday in quite the romantic manner.

Here’s what you need to know about the soon-to-be Mrs. Victor Cruz:

1. Cruz Proposed to Her While Saying Grace Before Dinner

On July 13, Cruz made a romantic proposal during a celebration ceremony at the Love of Jesus Family Church in Paterson, NJ for their daughter Kennedy in front of family and friends. In the middle of saying Grace before eating, Cruz stopped to get down on one knee and give his longtime girlfriend a diamond ring. The touching moment was caught on tape- watch the video above to check it out.

2. They Have Been Together for 11 Years

The two met as teenagers in 2003 while attending Paterson Catholic High School and have been together ever since.

3. They Have a Daughter Together

In 2012 after 9 years of dating, Watley gave birth to their daughter Kennedy.

4. They’re Going to Have Either a New York or Destination Wedding

Watley told PageSix.com that they haven’t made any plans yet, but are thinking about having either a destination wedding or a signature New York wedding.

5. She is the CEO of a Brand Marketing Company

Watley, a native of Passaic County, NJ, followed her dreams of becoming a successful adult. She grew up in a family of athletes and always had a spark for sports which inspired her to start up a sports agency which Cruz is a part of, along with other successful athletes.

She told PRWeb.com in an interview:

When I was younger, I always had this image that you needed to be a millionaire to start your own business and call yourself an entrepreneur. If I had just met someone I could relate to and show me that it’s possible to be an entrepreneur at any stage of your life, I probably would’ve started my business much sooner.”

When I told people about my dream, they would just laugh at me. There have been bumps along the road, but I persisted and stuck to my plan.” 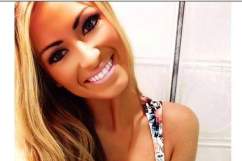 Loading more stories
wpDiscuz
0
0
Would love your thoughts, please comment.x
()
x
| Reply
Victor Cruz proposed to his longtime girlfriend on Sunday in quite the romantic manner. Here's what you need to know about the soon-to-be Mrs. Victor Cruz