The Czech broke Bouchard’s serve six times and dispatched the 20-year-old in 55 minutes.

Kvitova is a game away from her second Wimbledon title after taking the first five games of the second set. She has a chance to finish Bouchard off in less than an hour.

Another major break for Kvitova. She furthers her lead to 4-0 in the 2nd set. Can Bouchard pull out a comeback here? #Wimbledon

Kvitova overpowering.. Breaks Genie again and is up 2-0 in 2nd set..#Wimbledon

The skies are gray and ominous at SW19, and Petra Kvitova is shaking down the thunder on Eugenie Bouchard.

Tough one for Bouchard so far. Nothing she’s doing is bothering Kvitova at all

Some remarkable hitting from Kvitova. She leads 5-2 in the 1st set with 15 winners on the board #Wimbledon pic.twitter.com/Yyq82ui4fU

POINT ! Amazing defence from Kvitova ! What a last shot. 3-1.

Petra Kvitova gets the 1st break, leads Bouchard 2-1 in the opening set of this Wimbledon final http://t.co/zn44ioxRZS #Tenis 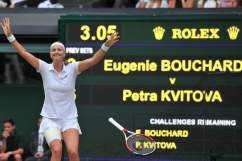