On Thursday morning, Malaysia Airlines Flight 17 flying from Amsterdam to Kuala Lumpur was shot down over eastern Ukraine. Of the 298 people onboard, 189 of them were Dutch. The Ukrainian government blamed Russian-backed separatists for the attack, while Russian leader Vladimir Putin has skirted any responsibility.

It now looks like even the Russian people do not believe Putin. Outside the Dutch embassy in Moscow, Russian citizens have been leaving flowers and even signs that say, “forgive us.” Check out the pictures below:

Dutch embassy, Moscow: "Forgive us". Some russians understands; they don't let themselves be fooled by Putin media pic.twitter.com/CIFtTy8XRN 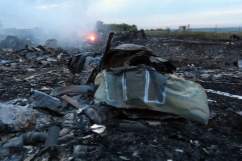