NFL star and Kim Kardashian castoff Reggie Bush got married over the weekend to Lilit Avagyan, an Armenian dancer and the mother of his child.

Here’s what you should know about Avagyan, her relationship with Bush, and why their wedding was such a gossip goldmine.

1. They Have a Baby Daughter

Avagyan gave birth to the baby on May 6, 2013, after dating Bush for a year and a half. Bush announced the news in a Florida radio interview in October 2012, when he was playing for the Dolphins.

Like her more-famous doppelganger, Avagyan is of Armenian descent and shares the raven hair and olive skin that mark Bush’s type.

When she first came on the scene, gossip hounds instantly billed her as a Kim K “lookalike.” It was just too easy.

Bush and Kardashian called it quits in 2010 after a three-year rocky relationship. She went on to marry NBA player Kris Humphries and, after their divorce, rap icon Kanye West.

During the contentious Humphries divorce case, his ex famously claimed Kardashian cheated on Bush with Kanye.

3. Kim’s Stepbrother Went to Bush’s Wedding After Skipping Hers

In gossip circles, Bush and Avagyan’s wedding, held at the posh Grand Del Mar hotel in San Diego, was more notable for a certain guest than for the bride and groom.

And of course it involves Kim Kardashian.

Brody Jenner, Kardashian’s stepbrother, was at the wedding with a beautiful blonde on his arm, girlfriend Kaitlynn Carter.

This is a big deal because he skipped Kim and Kanye’s wedding so he could DJ a party — and because he’s clearly good buddies with her bitter ex.

4. Avagyan Is a Renowned Dancer

For most of her life, Avagyan her passion, dance. Her talents have been recognized on multiple occasions. In 2010, she won the Rising Star Open dance competition in Florida. She’s also represented the U.S. at international dance events. Not to mention an appearance as guest performer on Dancing With the Stars. More recently, in 2013, she participated in the Latin American World Championships in Australia and at Louis Van Amstel’s Ballroom with a Twist. She studied dance in Europe for 12 years.

Her parents are Avag and Juleta Avagyan from Chatsworth, California. Her father is a Senior Process Engineer with International Solar Electric. The Avagyan’s live in a $525,000 home in Chatsworth. 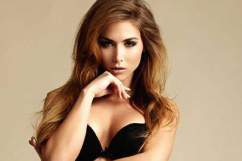