Tina Sarnecki Milone is the wife of former Oakland A’s pitcher, Tommy Milone and she has been tweeting up a storm since her husband was traded to the Minnesota Twins.

1. She Has Been Tweeting All Day About Milone’s Trade

Tommy Milone was traded to the Minnesota Twins this morning after being a part of the Oakland A’s since 2011. The A’s acquired John Lackey today.

Tina seems to be pretty upset about the move and has been tweeting to her friends about how much she will miss them and the Oakland A’s family.

To my A's wives and gfs… I can't respond to your texts yet cause I can't look at them without crying. If you see this I'll respond soon

2. She is a Very Supportive Wife

Left-hander Tommy Milone has asked the club to trade him, major-league sources tell FOX Sports.
The A’s sent Milone to Triple-A on July 5 after acquiring right-handers Jeff Samardzija and Jason Hammel from the Chicago Cubs.

However, Tina shut down the allegations claiming he never asked to be traded. She is constantly tweeting about how much she loves her husband and is extrememly supportive to him in every way.

Calm down peeps. My husband is an amazingly humble grateful man.

The happy couple was married last year on November 16, 2013.

4. She is Close With Her Family

She and her family frequent Tommy’s games and are very much involved in his baseball career.

5. They Were High School Sweethearts

Tina and Tommy have been together since high school as shown by her throw back photo of the couple at the 11th grade prom. 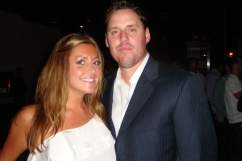 Loading more stories
wpDiscuz
1
0
Would love your thoughts, please comment.x
()
x
| Reply
Tina Milone is the wife of former Oakland A's pitcher, Tommy Milone and she has been tweeting up a storm since her husband was traded to the Minnesota Twins.