Two American aid workers working in West Africa, Nancy Writebol and Dr. Kent Brantly, have both contracted the deadly Ebola virus, which has currently killed some 729 people. Despite recent reports that both were improving slightly, the United States has decided to bring its infected citizens to the isolation wing of Emory Hospital to be treated.

Below you can see a video explaining the isolation measures that will be taken during transportation and in the hospital to prevent Americans from getting infected:

On Thursday, a business jet equipped with an isolation pod left the United States to evacuate the two infected American back to the United States. Their arrival in Georgia later this week will be the first time a person infected with Ebola will be on American soil. 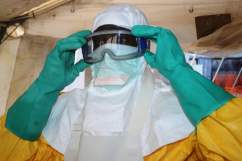 Read More
Breaking News, Ebola
Two Americans in West Africa infected with the Ebola Virus are being evacuated to a hospital in Atlanta, Georgia.