Andre Williams carries the ball for the Giants in the first half. (Getty)

Neither game has been pretty, but the New York Giants are 2-0 this preseason after edging the Pittsburgh Steelers 20-17 Saturday night in a game that included only three offensive touchdowns.

Shaun Suisham’s 26-yard field goal gave the Steelers an early lead with 10:26 to go in the first quarter, but Rashad Jennings broke away for a 73-yard touchdown on the first play of Big Blue’s next drive to give the home team the lead.

The Giants had gone 3-and-out on their previous drive. This time, they needed one play and 20 seconds to score when Jenning burst through the right side of the line and was off to the races.

A pair of Josh Brown field goals in the second quarter put the Giants on top 13-3 heading into the half.

Suisham, who missed a field goal in the second quarter, converted on one late in the third to bring Pittsburgh to within 13-6, then again 59 seconds into the fourth quarter on a 32-yarder to make it 13-9.

Giants still with no 3rd down conversions. Josh Brown hits a 45-yard field goal to give Giants a 10-3 lead.

Howard Jones Recovered a Fumble & Took it in for a Score

Neither team had scored a touchdown since the first quarter when Pittsburgh’s Howard Jones returned a fumble recovery for a touchdown to put Pittsburgh on top with 10:16 left in the game.

COREY WASHINGTON. TOUCHDOWN. He better make the team. We need the height.

Curtis Painter, battling with Ryan Nassib to be Eli Manning’s backup, led an impressive drive that culminated in a touchdown pass to Corey Washington, putting the Giants back on top 20-16 with just under 3 minutes left in the game.

Eli Manning stayed in for four series, a relatively long time by preseason standards. (Although one series lasted exactly one play because of the Jennings touchdown.)

It’s a tiny sample size, but this isn’t the kind of stat line Giants fans are looking for: 0-for-2 passing with a sack in 11 plays.

Ben Roethlisberger’s outing was more brief: He played only one series, completing 1 of 2 passes for 46 yards and driving Pittsburgh into the redzone before being forced to settle for a field goal when he threw an incompletion on 3rd down.

The sign says it all! Kickoff is less than two hours away! #giantspride #pitvsnyg pic.twitter.com/wIOnbhVA94

The following players are not expected to play tonight vs. the Steelers: http://t.co/ny8dLBdyif #giants #pitvsnyg pic.twitter.com/TsFDYqcXso 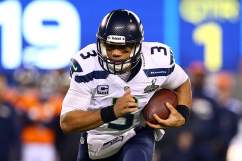 Read More
Football, NFL
Follow Heavy ↓
Neither game has been pretty, but the Giants are 2-0 this preseason after edging the Steelers 20-17 Saturday in a game that included only three offensive touchdowns.