The 68th Little League World Series is an eclectic mix of young players this year. The series will start on Thursday, August 14 in South Williamsport, Pennsylvania where it is hosted annually.

Here’s what you need to know about where to watch, who to watch and what to expect:

1. It Will be Broadcast on ESPN

The series will be shown on ESPN and can be streamed live from their website starting on Thursday, August 14. There will be a pre-game show and then coverage of the opening game that starts at 1 p.m.

The first event kicking off the World Series begin on Wednesday at 6 p.m. for the Grand Slam Parade held in Williamsport. Dave Winfield, a hall of fame player, will be the grand marshal of the parade along with the deliverer of the first pitch the following day in the opening game being held at Volunteer Stadium at 1 p.m. between the Czech Republic and Tokyo.

Four game will be played by Tuesday and then four more by next Thursday which will be double elimination portion of the series.

The championship game will take place on Sunday, August 24 at 3 p.m. after the International and U.S.A. winner is determined on the 23rd.

By the time the tournament is over, there will be 30 games played total.

4. Two Girls Will Be Competing in the World Series

The Little League World Series begins on Thursday, August 14 in Williamsport, Pennsylvania. For the first time since 2004, there will be two girls present in the tournament fighting for the World Series win. Emma March of South Vancouver Little League in British Columbia, Canada, will be the other girl competing this week in the LLWS.

Davis and March make up the third pair of girls in history (68 years) to qualify in the same World Series. Emma qualified earlier in the day making her the 17th girl player in history to do so followed by Davis who qualified later in the day to become the 18th.

On the Sunday of the Mid-Atlantic Regional championship game, Davis threw a 3-hitter to carry her team into the LLWS. Her stats for the victory include 6 strikeouts during the 6-inning game to win 8-0 over Newark, Delawar’s little league team.

Davis faced Newark previously where she had 10 strikeouts.

Not only is Davis Philly’s starting pitcher, but she’s a good one at that. She strikes out her unsuspecting opponents with 70 mph fast balls and curve balls rare among 13-year-olds, let alone 13-year-old girls.

Although this is the 75th year the LLWS has been around, this will be the 68th LLWS. The growth of the league was stunted at first due to the breakout of World War II, but has grown around the world exponentially since. The history of the LLWS is rich and full of tradition starting with it’s location where it has been held from the beginning. 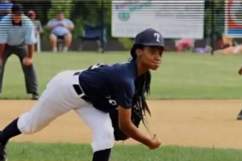