It wasn’t a surprise, but it was a historic moment nevertheless: Michael Sam entered the St. Louis Rams’ preseason game against the New Orleans Saints Friday night at defensive end, becoming the first openly gay player to play in an NFL game.

He made an impact shortly after with his first career tackle when he brought down the Saints’ Khiry Robinson. 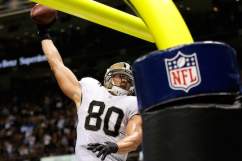