Jimmy Graham and Co. are on the field for the first time. (Getty)

For a preseason game, this one sure had a lot of action.

Friday’s opener between the New Orleans Saints and St. Louis Rams included plenty of offense despite neither team’s starting quarterback taking a snap.

It included a historic appearance by Michael Sam, impressive passing displays by both teams, and finally, an extremely inopportune intentional grounding call that allowed New Orleans to escape with a 26-24 win.

Michael Sam Made a Tackle in His NFL Debut

Michael Sam gets his first NFL snap, playing LDE, with about 5 minutes to go in the first quarter.

It wasn’t a surprise, but it was a historic moment nevertheless: Sam entered the game at defensive end with 5 minutes left in the first quarter, becoming the first openly gay player to play in an NFL game.

He made an impact shortly after with his first career tackle when he brought down the Saints’ Khiry Robinson.

Wow the Rams just choked. How do you botch spiking the football and turn it into intentional grounding?

Chalk this up as a blunder meant for the preseason: Greg Zuerlein was lined up for a 49-yard field goal with 11 seconds left that would have given St. Louis a come-from-behind win. But Rams quarterback Austin Davis botched the spiking of the ball and got called from intentional grounding, drawing a 10-yard penalty and a 10-second runoff.

That left Zuerlein in the unenviable position of attempting a 59-yard field goal with the game on the line. The field goal missed, giving New Orleans a 2-point win.

#GregTheLeg is in for a potential 49-yard game-winning field goal with 11 seconds left to play! #NOvsSTL

Long story short, the #Rams have one second to get off a 59-yard field goal. #NOvsSTL

Whoops! Zuerlein misses wide left and the @Saints take over at their own 36. #NOvsSTL

Derek Dimke Came on in Relief & Gave the Saints the Lead

Is there a legitimate kicking controversy in New Orleans? Derek Dimke came in for Shayne Graham and kicked a 37-yard field goal — a distance 4 yards longer than the 33-yard extra point Graham missed — to give New Orleans a 19-17 lead, the game’s fifth lead change.

Mark Ingram’s Touchdown Put the Saints on Top, but the Rams Took the Lead Into the Half

Mark Ingram scored from 22 yards out to give the Saints the lead, and Shayne Graham made it 2 out of 3 on extra points, putting New Orleans on top 16-14 with just over 2 minutes left in the first half. But a false start on the Rams didn’t prevent Greg Zuerlein from kicking a 45-yard field goal at the end of the half to put St. Louis on top by a point.

Flag on the offense. Now a 45 yarder and a little more difficult. #rams #NOvsSTL

A false start extends #GregTheLeg's attempt to 45 yards, but he still hits it. #NOvsSTL

Hill to WR Stedman Bailey for a 24-yard TD after big gain on third down from RB Benny Cunningham. Nice adjustment by Bailey.

The Experiment With Longer Extra Points Got its First Casualty

The @Saints extra point attempt is no good! And with that, we endorse the 15-yard experiment. #NOvsSTL

Kyrie Robinson scored from 2 yards out to give the Saints a 9-7 lead about mid-way through the first quarter, but what happened next was more interesting: Shayne Graham missed the extra point — the first time the league’s experiment with longer extra points led to a miss.

TOUCHDOWN! Hill connects with Cory Harkey to put the #Rams up 7-0 with a successful #GregTheLeg PAT. pic.twitter.com/2i5XRC9BGI

Hill hit Cory Harkey to give St. Louis an early lead. The Saints got on the board later in the quarter on a Shayne Graham field goal to make it 7-3.

Preseason or not, there was a buzz on the field — and on Twitter — as the teams readied for kickoff. 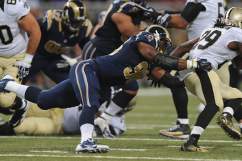 Read More
Football, NFL
Follow Heavy ↓
Michael Sam's NFL debut is among the storylines as the St. Louis Rams host the New Orleans Saints in the preseason opener for both teams.