The Boston Red Sox gave their fans something to be happy about amid a lost season Friday when they agreed to a 7-year, $72.5 million deal with 27-year-old Cuban outfielder Rusney Castillo.

Castillo’s primary position is centerfield, but he’a also played the infield in the past, giving the Sox options as they look toward 2015.

There’s not a ton of data out there on Castillo since he’s never played professionally outside of Cuba, but here’s a look at some key stats and scouting reports.

1. Castillo Has Excellent Speed & Is a Good Line-Drive Hitter

The 5-foot-9 Castillo is considered an elite base stealer and a good line-drive hitter. Baseball America put together a highlight feel, which you can watch above.

Here’s what his baseball-reference.com bio says about him:

He hit 22 doubles and 18 homers, scored 75 runs and drove in 79 in 88 games. He was 10th in the Cuban Serie Nacional in RBI, tied Urmaris Guerra for 9th in total bases (202) and led with 29 steals, 6 more than runner-up Yoelvis Leyva. He was caught only six times. Surprisingly, he had only stolen successfully twice in eight tries over his first two campaigns.

2. Castillo Has Put on Muscle & Hit With More Power Since Leaving Cuba

Baseball America’s Ben Badler has an interesting report on how scouts’ evaluations of Castillo have chanced since he defected from Cuba in December 2013.

Badler reported that after watching Castillo in a showcase last month at the University of Miami, scouts went back and updated their scouting reports, impressed that Castillo had gained 20 pounds of muscle and was hitting with more power. (Watch the video above for a highlight feel from the showcase, which included Castillo hitting, running and playing both the outfield and infield.)

Some scouts who had followed Castillo with the Cuban national team felt he would be a steady, everyday center fielder in the big leagues, while others felt he would fit best as a fourth outfielder, with good speed and defense in center field, a line-drive stroke, an aggressive hitting approach and occasional power.

Rusney Castillo screenshot-2When Castillo showed up on Saturday at the University of Miami, scouts saw a different physique, which has translated to more power. At 5-foot-9, 205 pounds, Castillo is 20 pounds heavier than he was in Cuba, and it’s in a good way, with plenty of muscle packed on to his athletic frame.

The biggest difference was in Castillo’s power. Scouts get to watch Cuban players take batting practice at international tournaments, and Castillo showed more juice in his bat than he had before he left Cuba.

If he’€™€™s not a five-tool player, he’€™€™s a least a four-tool player. He’€™€™s very comparable to [Dodgers outfielder Yasiel] Puig. Obviously a different height and size, but very similar qualities.

4. Fangraphs Projects Castillo to Have a WAR Around +3

Fangraphs’ Dave Cameron notes that Castillo’s skillset matches descriptions of Shane Victorino and Rajai Davis. With that in mind, Camerson writes that Castillo projects to have a Wins Above Replacement player (WAR) of around +3.

If he’s somewhere between Davis and Victorino (career ISO of .154, wRC+ of 106), and he can actually play center field, then he should project as something close to a +3 WAR player, depending on how good of a defender he is and whether he can add any value on the bases. The six years will likely cover his age-28 through age-33 seasons, so even with some drop-off in value at the end of the deal, projecting something like +15 WAR from Castillo over the next six years doesn’t seem unreasonable. That would put this price at around $5 million per win, and there’s no draft pick tax for signing Castillo like there would be for a similar Major League free agent.

5. Castillo’s Deal Is the Biggest Ever for a Cuban Player

WEEI’s Alex Speier reported that the deal is for seven years and $72.5 million. The deal is expected to start immediately, meaning Castillo will be able to join the Sox for the remainder of the season.

As Fox Sports’ Ken Rosenthal notes, the $72.5 million is the highest total value even in a contract for a Cuban player. The White Sox’s deal with star outfielder Jose Abreu is for the highest annual value. 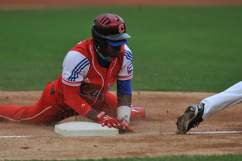 Rusney Castillo Photos: The Pictures You Need to See 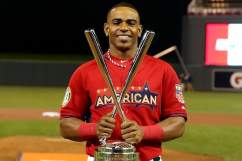 Loading more stories
wpDiscuz
0
0
Would love your thoughts, please comment.x
()
x
| Reply
Cuban outfielder Rusney Castillo is considered a dynamic offensive threat who can hit and steal bases. Here's a look at some of his stats.