On August 14, the 30 owners in the MLB will vote for the first time since 1998 for a new Major League Baseball Commissioner and Red Sox co-owner Tom Werner is a strong prospect.

Werner entered television by first working for ABC-TV and then moving on to become a producer of shows like The Cosby Show and That 70s Show where he started making his millions. As a huge sports fan he eventually was able to become co-owner of the Red Sox after giving up ownership of the San Diego Padres and co-founding the Fenway Sports Group.

2. He is in Contention to be the Next MLB Commissioner

Analysts are predicting that if there is a winner, it will be COO Rob Manfred. However that is IF someone wins. There is also a large chance that a stalemate could occur since the only way to declare who won the position is by receiving at least 23 votes out of the 30 teams, a difficult feat.

Werner impressed the owners with his presentation prior to their decision although it is unknown as to whether it will be enough to change votes, according to the Boston Globe.

An unnamed owner told the Boston Globe of Werner’s presentation:

He knocked it out of the park. Don’t know if he changed anyone’s mind, but he made some outstanding points on where he sees the game going and what we need to do to be more current and change with the times.

Although Tim Brosnan, Executive Vice President for Business in the MLB, is considered a lesser prospect, there have been no negative comments towards him and a few votes his way could take away from Werner and Mandred’s tallies.

As a successful businessman and entrepeneaur, Werner has managed to accumulate approximately $600 million net worth, according to Forbes.

4. He Almost Died in the 9/11 Terrorist Attacks While Dating Katie Couric

Werner and Couric dated for awhile after he split with his ex-wife, Jill Werner in 2000, but eventually Werner dumped her via email in 2005. Couric wrote about the devastating and cowardly (on his part) break up in her book, Katie: The Real Story.

Katie was upset that Tom didn’t have the nerve to break up with her in person – or even over the phone,” a “close source” told Edward Klein, the author of “Katie: The Real Story.” “It was embarrassing and humiliating for her.”

Before the breakup, she wrote in her book her fear when she realized Werner who she had been with took a flight the morning of 9/11 to Los Angeles at her plead instead of leaving the night before, but luckily it was not the one that came down in Pennsylvania.

Here are excerpts about the incident from her book:

5. He is the Chairman of the Liverpool Football Club

Manhattan born Werner attended high school at The Hotchkiss School, a prestigious boarding school in Connecticut and went on to attend Harvard University.

Werner told Liverpoolfc.com of the 2014-15 season:

We’ve had a splendid season so far. We’re in a very competitive league, and I don’t want to promise that we’re going to finish in the top four. But we’re certainly playing excellent football. Last week’s match against Stoke was another step up in terms of coming back in the second half. We’re certainly an offensive threat in every match. As a football fan, anybody in the world would have to say it’s exciting to watch Liverpool with Suarez and Sturridge playing up front. 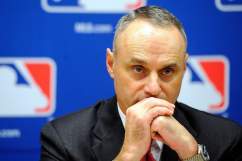 Read More
5 Fast Facts, Baseball, MLB, Sports
Follow News ↓
On August 14, the 30 owners in the MLB will vote for the first time since 1998 for a new MLB Commissioner and Red Sox co-owner Tom Werner is a strong prospect.