The fourth and final Grand Slam tennis tournament of the year starts next week when the world’s best players gather at the U.S. Open. Defending men’s champion Rafael Nadal won’t be there, but reigning Wimbledon champ Novak Djokovic will, as will Roger Federer, who will be seeking his record 18th Grand Slam title.

Read on for all the information you need about the schedule, TV coverage, odds and more.

1. The Draw Will be Revealed in a Webcast on Thursday

The men’s and women’s singles draws will be revealed at noon Eastern time on Thursday, August 21 during a webcast at USOpen.org. The tournament begins four days later at the Billie Jean King National Tennis Center in Flushing Meadows, New York.

The United States Tennis Association is hosting an online bracket challenge, giving fans an opportunity to win tickets to next year’s Open. You can play the bracket challenge beginning at 5 p.m. on Thursday. The deadline for entries is 11 a.m. on Monday, August 25.

2. ESPN, the Tennis Channel & CBS Have TV Rights in the U.S.

ESPN’s Game Day desk will be at the U.S. Open. (Getty)

ESPN and the Tennis Channel will have live TV coverage throughout the first two weeks of the tournament, with CBS scheduled to broadcast the men’s and women’s semifinals and finals.

ESPN and the Tennis Channel both have live-streaming options for desktop and mobile. You’ll need a cable provider log-in for either.

The tournament will be broadcast live on Eurosport in Europe, with coverage reaching 54 countries in Europe and 14 in Asia. Satellite provider WOW has broadcast rights in Japan.

Other TV outlets with rights include CCTV in China, Ten Sports in the Indian subcontinent, ESPN International in Latin America, TSN in Canada and Fox Sports Australia in Australia.

3. Rafael Nadal Won’t Be There to Defend His Title

For only the fourth time in history, the reigning U.S. Open men’s singles champion will not defend his title.

Rafael Nadal, who won the tournament last year, will miss the event for the second time in three years. The 14-time Grand Slam champion announced Monday that he’d be sidelined because of a wrist injury he suffered while training in July.

Nadal announced Monday on his Facebook page that he would miss the tournament:

I am very sorry to announce I won’t be able to play at this year’s US Open a tournament on which I’ve played 3 consecutive finals in my last participations. I am sure you understand that it is a very tough moment for me since it is a tournament I love and where I have great memories from fans, the night matches, so many things… Not much more I can do right now, other than accept the situation and, as always in my case, work hard in order to be able to compete at the highest level once I am back. 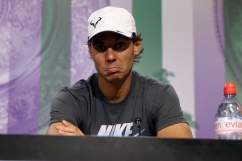 With Nadal out, Bovada lists Novak Djokovic as a 6/5 favorite to win the men’s singles draw. Roger Federer, who Djokovic beat in an epic, five-set final last month at Wimbledon, is next at 3/1, with Andy Murray third at 4/1.

Here’s a rundown of the men’s favorites:

Serena Williams enters the tournament as a 7/4 favorite to win the women’s singles draw, with Maria Sharapova next at 11/2, Simona Halep third at 7/1 and Victoria Azarenka fourth at 8/1.

5. Tickets Are on Sale Now

Individual tickets are on sale now at the U.S. Open website. You can also buy them over the phone by calling 718-760-6363 and buy or sell them on the U.S. Open ticket exchange.

Four types of tickets are available:

Ticket-holders for Ashe and Armstrong stadiums can also watch matches on other courts.

Loading more stories
wpDiscuz
0
0
Would love your thoughts, please comment.x
()
x
| Reply
The 2014 U.S. Open starts Monday, August 25 in New York, and we've got all the information you need on the draw, TV schedule, odds and more.