Jazz forward Gordon Hayward was the first player to learn he’d been cut following the game. ESPN’s Marc Stein tweeted the news Friday night. The team announced its full roster for the trip to Spain at 1 a.m. Saturday, with Kyle Korver, Chandler Parsons and Damian Lillard joining Hayward on the cut list.

You can look at the whole roster here.

The Americans will play an exhibition game Tuesday against Slovenia in the Canary Islands before opening the FIBA World Cup next Friday against Finland. 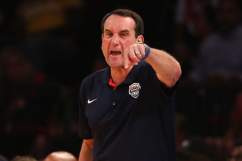